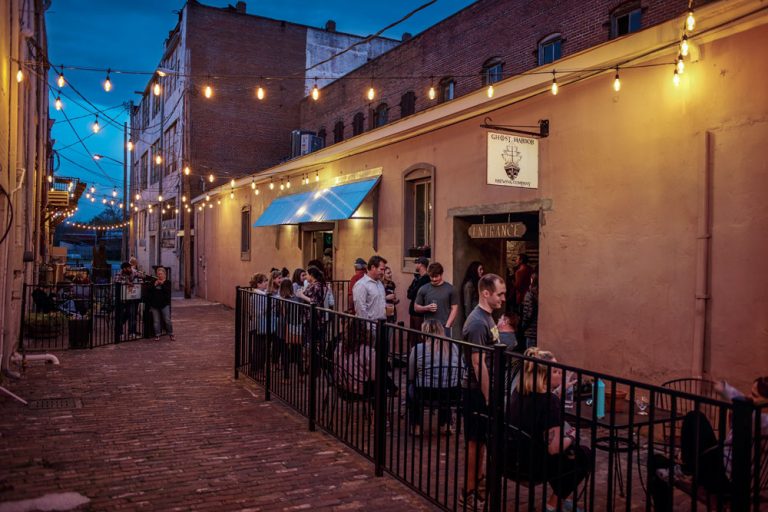 Big things happening in Eastern North Carolina’s smaller communities. From Goldsboro to Murfreesboro, from Kinston to Wilson, a renaissance is taking place in downtowns throughout the region.

Historic buildings are being spruced up and given new life. Locally owned shops and restaurants are filling the storefronts. And art projects in a variety of forms are adding a splash of color to this revival, all of which is attracting new residents, entrepreneurs and retirees to the area.

“It’s an exciting time around here right now,” says Kimberly Van Dyk, planning and community revitalization director for the City of Wilson. “I see growth and increasing vitality. That feeling of revitalization is pretty powerful.”

Wilson certainly is doing its part with the largest redevelopment project in city history: the transformation of an old downtown tobacco warehouse into a $12 million, mixed-use facility. The new Whirligig Station – named in honor of the distinctive artworks of the late North Carolina sculptort Vollis Simpson – offers more than 90 loft-style apartments, approximately 10,000 square feet of commercial space, a restaurant, and a small museum and visitor center for the adjacent Whirligig Park.

“This triples the amount of residential living options in downtown Wilson,” Van Dyk says. “Having that many more residents in downtown is really going to get things to that tipping point, where you have people mixing and mingling, and it leads to more shops and restaurants and entertainment options. It’s a special feeling when you’re in a vibrant downtown, even if it’s a small place.”

A similar project is under way in nearby Rocky Mount. This time, it’s an old cotton mill that has been renovated, churning back into action with a mix of loft apartments, cottages, office space, restaurants and a brewery (one of more than two dozen craft breweries in the region). There also are plans for a coffee shop, indoor event space and outdoor amphitheater on the 160-acre property.

‘Our Downtown Is Alive’

Even without the benefit of one major project, several cities in Eastern North Carolina still are experiencing downtown growth.

Goldsboro has energized its downtown through $20 million in grants and investments, while Kinston has developed a thriving arts-and-culture district, along with a craft brewery and several award-winning restaurants.

Meanwhile in Murfreesboro in Hertford County, downtown revitalization is being spurred by an influx of new shops, including some that are owned by expatriates who have returned home. For example, after nearly 20 years in Los Angeles, filmmaker Caroline Stephenson moved back to Murfreesboro in 2010, and in 2016 she and her husband opened Cultivator Bookstore.

North Carolina’s Eastern Region is building on its reputation as a first-class market for value-added agriculture and food production.

“It’s a literal mom-and-pop organization, with volunteers to helps us,” says Stephenson, who also helped form the Murfreesboro Community Garden. “About 90 percent of our inventory is donated to us. It hasn’t been easy, but we’re showing people that it is possible. We’re making this small town more livable. I’m optimistic, because the possibility in our community is so great.”

Murfreesboro native Geri Bradshaw feels the same way, which is why she relocated her interior design company Southern Interiors from Virginia to Murfreesboro.

“Our downtown is alive. Our buildings are full of businesses,” Bradshaw says. “Yet there is still a quaintness to the city, and a family atmosphere.”

Farmville in Pitt County has discovered an innovative way to generate economic activity. In conjunction with East Carolina University’s School of Art and Design, the community has turned a former Gulf service station into the GlasStation, a glass-blowing facility where classes are taught for students at ECU and Pitt Community College.

Tourists started making special trips to Farmville just to see the GlasStation demonstrations, which has jump-started the arts scene in Farmville. Galleries, antique shops and a theater line Main Street, along with a number of new restaurants. “The Farmville group came to me and said they were looking to reinvigorate their downtown, and that art was the way to make it happen,” says Chris Buddo, dean of ECU’s College of Fine Arts and Communication. “We decided that a glass studio would be more of an attraction for people.”

“This is the perfect partnership,” Buddo says. “We get to have a glass program for our students, and it has created this economic and tourist buzz in Farmville that has been amazing. Both sides of the equation have gotten some pretty amazing outcomes. And we’ve barely scratched the surface.”