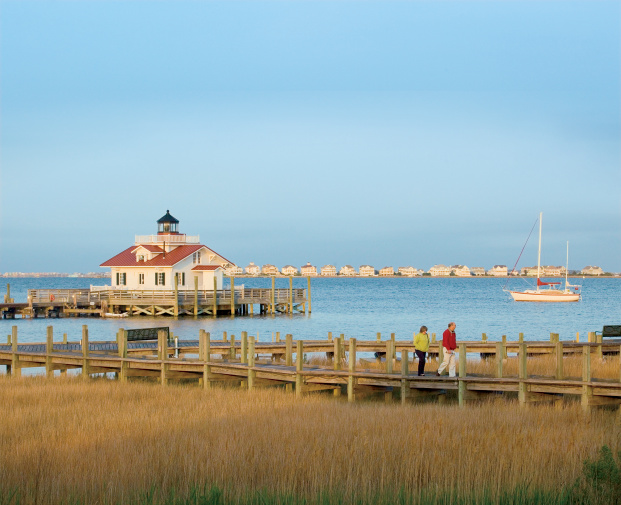 Eastern North Carolina’s healthy economy commands attention well beyond its borders, aided by the region’s rich history and attractive towns and cities that have cultivated a vibrant tourism industry and drawn new residents to the area.

Beautiful beaches and waterways, verdant forests and hills that provide year-round outdoor recreational opportunities, state and national parks (as well as seashores) and a temperate coastal climate give the 24-county region unique appeal. The Carolina coast is noted for its convergence of northern and southern species of animals, fish and plants; another element of its great diversity.

Combine that with friendly communities that offer affordable housing, short commutes and historic downtowns, add top-notch culture, arts, food and entertainment choices and you’ve got a very special recipe. For example, the award winning documentary and food cooking series, “A Chef’s Life’” featured on PBS is the creation of husband and wife team Ben Knight and Vivian Howard (the chef) who operate Chef and the Farmer in Kinston, NC.

The restaurant’s dining experience draws destination fans and “foodies” to the region from across the country, and literally have followers around the world. The region is not only a retirement mecca, it is also drawing entrepreneurs and small business owners in search of the good life.

“We see people coming from all over the U.S. and the world to buy our properties,” says Claudia

DeViney, who retired in April as regional director for Preservation North Carolina, which, among its other duties, finds owners for historic homes.  The region is not only a retirement mecca, it is also drawing entrepreneurs and small business owners in search of the good life.

“We see people coming from all over the U.S. and the world to buy our properties,” says Claudia DeViney, who retired in April as regional director for Preservation North Carolina, which, among its other duties, finds owners for historic homes.

Everything Old Is New Again

Eastern North Carolina enjoys bounteous historical housing stock, much of which is surprisingly affordable. And, DeViney points out, rehabbing a 200-year-old building is right in line with today’s “green” thinking and can provide modern amenities homeowners seek.

Discover the Sights and Sounds of Eastern North Carolina

The growing interest in rehabbing older structures has revitalized communities such as Columbia, Goldsboro and Wilson. In Edenton, a defunct cotton mill and its mill workers’ houses were rehabbed by Preservation North Carolina and now comprise the Edenton Cotton Mill Historic District, a bustling neighborhood popular with young families, professionals and older residents.

Tourism in North Carolina is a $21 billion industry. In Chowan County the impact of tourism was more than $18 million in 2014, says Nancy Nichols, director of the Chowan County Tourism Development Authority.

“And consider that we’re a town of only 5,000 in one of the smallest counties in the state,” she says. “Tourism has grown well here, and it’s a nice steady growth. That’s important too, that we have balanced growth.”

Some of the area’s most popular historic sites include Roanoke Island in Dare County, where the English first settled in America, and the Lost Colony.

Bath in Beaufort County is the state’s oldest continuous settlement, and visitors flock to Edenton, where they are charmed by the city’s quaint waterfront downtown, the Cupola House, the 1767 Chowan County Courthouse and the 1886 Roanoke River Lighthouse. Unique new attractions are also popular.

At the Vineyards on the Scuppernong in Columbia, a wine tasting can also include a fun history lesson. Strange and wonderful birds from around the world are there for the gazing at the Sylvan Heights Bird Park in Scotland Neck in Halifax County. The Port City Tour Co. in Atlantic Beach provides both historic tours and outdoor adventures.

The region has seen a surge in retirement communities such as Albemarle Plantation in picturesque Hertford and Scotch Hall Preserve, a golf community on the Chowan River near Edenton. The influx of new residents and growing tourism numbers have fueled a boom in restaurants, entertainment venues, shops and service businesses in many communities.

Tech-oriented businesses have especially been drawn to Greenville’s central business district, where they find, “not just a great place to work but a dynamic experience in their lunch break,” says Bianca Shoneman, director of Uptown Greenville. But the economic impact stretches into the evening hours as well.

Energy in Eastern North Carolina is More than a Vibe

Redevelopment efforts in Uptown Greenville have also resulted in two new craft breweries, a phenomenon spreading across even the smaller towns in the region.

“When our first mixed-use project opened in 2014, overnight our residential population increased 100 percent, and retailers and restaurants immediately felt the effects of that,” Shoneman says. ”We went from 12 restaurants to 28 -– really amazing. Urbanization in Eastern North Carolina is working.”