What happens when you combine arcade games with cocktails and craft beer? A really, really good time. 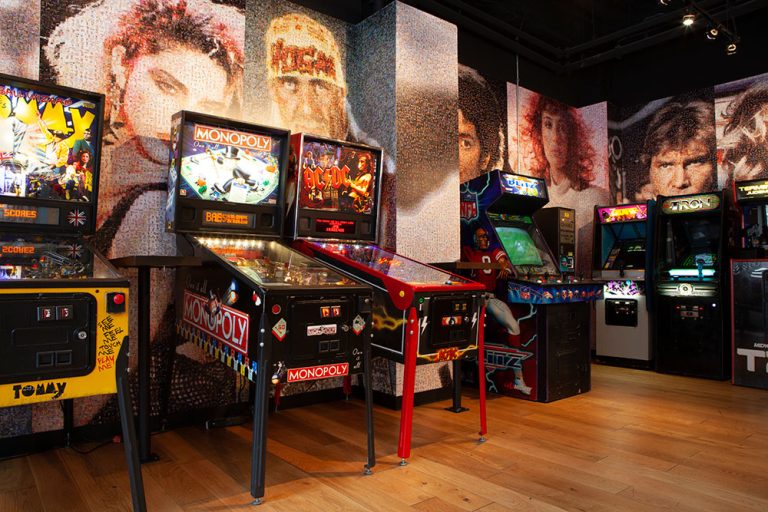 Back in the day, arcades were THE place to hang out. You could challenge your crush to a game of Dig Dug or try to beat your high score in Pac Man. After many years of dormancy, we’re thrilled to see arcades making a comeback – and with a twist we’re really excited about. Today’s arcades are doubling as awesome bars, serving up craft beer, cocktails and awesome food. The result? A really, really good time.

Fancy a tipsy game of Donkey Kong, anyone? Here are a few of Livability.com’s favorite arcade bars across the country right now – in some cities you might not expect.

1. The Archives in Burlington, VT

With 30 vintage arcade games and seven unique pinball machines, The Archives is a barcade that will impress even the most avid arcade lover. Game offerings include old school faves like Galaga, Crystal Castles and Asteroids, along with ’90s classics like NFL Blitz and House of the Dead 2.

What really makes this Burlington-based bar stand out from the rest is its dedication to featuring beer that’s hard to find and limited edition as well as pouring up naturally-produced wines. They also have a pretty epic cheese plate on the menu if that’s your jam.

A craft pizza and drinks menu named after arcade games and their heroes gets visitors in the mood for a night of gaming at Coin-Op. Sixteen beers are on tap from local California microbreweries, but their claim to fame is their tiki drinks. Try the Island Prime, a delicious mixture of coconut rum, lime, pineapple and orange liqueur.

Of course, it wouldn’t be an arcade bar without arcade games, and Coin-Op doesn’t slack in that department. The Sacramento barcade currently boasts 40 games like Tron and Mortal Kombat and an impressive array of award-winning pinball machines.

More than 50 classic arcade games and pinball machines are all playable with just a quarter each at Up-Down. Besides the usual Tetris, Donkey Kong and Pac Man, games like Tapper, Burger Time and Karate Champ can be found in this fantastic Kansas City arcade. This 21-and-up arcade bar also features skeeball and Nintendo 64 games, and giant Connect Four and Jenga round out their entertainment offerings.

On the beer side, Up-Down doesn’t hold back. The bar pours out more than 50 beers on tap, including some excellent craft beer options, with even more in cans and bottles. Hungry? Pizza is sold by the slice or by the whole pie if you’ve worked up a big appetite playing Tron.

4. Round 1 Bowling and Amusement in Industry, CA

While you won’t need a DeLorean time machine to get here, Round 1 Bowling and Amusement gets our vote as one of the coolest arcade bars because of its history. The bar arcade sits in the Puente Hills Mall in Industry, CA, one of the filming locations for Back to the Future. After tracing Marty McFly’s steps, visitors can play newer games like House of the Dead Scarlet Dawn, HALO: Fireteam Raven and Groove Coaster 4, or get competitive with a game of ping pong, darts or bowling. Because it’s a chain, each location’s bar serves up different regional offerings.

BoxCar Bar + Arcade is a hip barcade with a hometown feel. There’s always a token special or a tournament going on, just be sure to check the events calendar before you visit. BoxCar’s impressive arcade is not only home to those classics you expect from any decent arcade, but it also has a few surprises like Mario Kart and Guitar Hero on its repertoire. Adding onto the hometown feel, local food trucks often make a stop here, but BoxCar’s outdoor pizza kitchen is also not one to pass up. And, with 24 local and craft beers on tap, it’s easy to see why BoxCar has been lauded as one of Greensboro’s best craft beer bars.

Here at 16-Bit Bar + Arcade, if you drink, you play for free. You don’t have to tell us twice! There’s really nothing better than grabbing a “Carrie Fisherâ€ (a coconut rum cocktail featuring rock candy) and trying to beat the high score in Frogger. Frogger not your game? There are more than 40 classic arcade games on the floor of this Cleveland-based barcade, including Off Road, Mappy, The Simpsons and Street Fighter II.

Weekly theme days like Old School Hip Hop and classic game tournaments on Mondays keep things fresh and the regulars coming back for more. And if you’re feeling especially daring, mosey over to the bar and order the “Game Overâ€ – a seriously insane 25 oz drink comprised of eight liquors and Hawaiian Punch.