From the cities that spin records to the ones that press them, these are the best spots for easy listening. 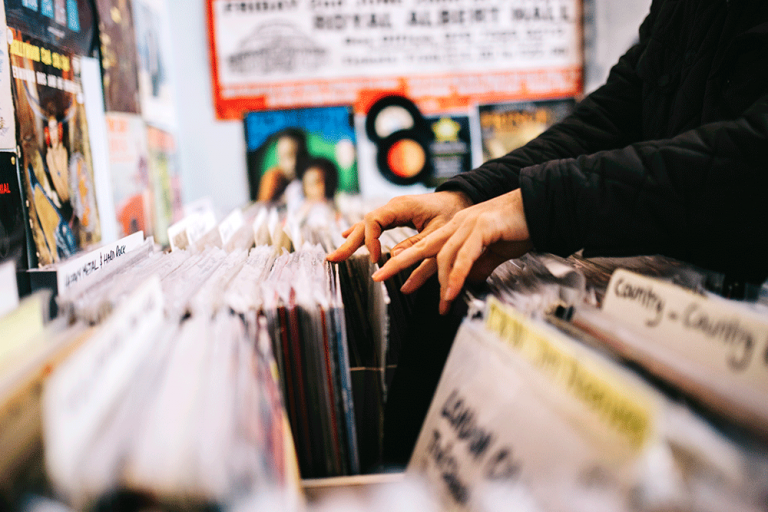 People like to say that music is dead. Disco is dead, Punk is dead, Rock-n-Roll is dead, and on and on. They say that the industry has changed so fundamentally in the past ten or fifteen or twenty years that there’s no going back to its former “glory days.”

And that may be partly true — evolution is part of the jam — but that doesn’t mean we lose everything that made experiencing music special. There’s still the electric experience of attending live shows, still the euphoric feeling of belting your favorite melodies in the car with your best friends on your way to who-knows-where. There’s still the armor-like confidence boost of sporting your favorite band tee around town, getting nods from fellow fans, maybe of those who attended that very tour.

And there’s still the magic ritual of unsheathing that shiny black disc from its decorated sleeve, dropping needle to vinyl and listening to an album front to back. Giving yourself over to the music, giving it the time and space to take you somewhere else for a while, just as the artist intended.

We all know about that corner in Winslow, Arizona. But we bet you didn’t know you could visit the real-life places behind these famous songs.

A kind of alchemy happens when we play our records when we listen to vinyl. It turns a passive experience into an intentional one, and there is no denying the profound effect it has had on so many generations of people, young and old.

So, if you’re in the mood to go out and pick up a new (or old) vinyl, here are some places that have what you’re looking for.

Let’s begin with a heavy hitter: L.A. Though it’s not most known for its music industry, you’d be hard-pressed to find a person who doesn’t remember what Hollywood Tower Records is or even what it looked like. Then there’s the world-famous Amoeba Music, which is what we’re here to discuss.

Amoeba has three locations in California, but the biggest and most famous of the bunch is the Hollywood branch. Although Covid-19 saw the permanent closure of its iconic Sunset Blvd store, it has relocated to another massive location on Hollywood Blvd. There are literally tens of thousands of CDs, cassettes, DVDs, t-shirts, posters and glorious vinyls. And they’re a buy, sell and trade business, so you can bring in a stack of records off your own shelf and get some cash or store credit to update your collection! Oh, and they host live shows of up-n-coming indie groups as well as some of the biggest names in music.

If you didn’t already know, Seattle is the birthplace of grunge. Bands from Nirvana to The Maldives found their sound in this rainy Pacific Northwest city and there is still a considerable music presence here. With live music venues and recording studios scattered all across the city, you’re bound to fall in love with a new band.

But what about where to buy vinyl? Try stopping by Sonic Boom Records on historic Market St.

Started in the late ’90s by two friends with a passion for indie music, Sonic Boom made a name for itself the following year when they hosted a live performance of Death Cab For Cutie’s then-new album Something About Airplanes. The rest, as they say, is history.

Music is not necessarily the first thing you think of when you think of Chicago, but it should be. Chicago is home to a massive blues and jazz scene, with artists from Sam Cooke to Jennifer Hudson finding their start here. Along with being home to tons of historic live venues, it’s also home to a trendy record shop chain, Reckless Records.

Reckless Records began across the pond in London but made its way to Chicago in ’89. Today they have three locations in the Windy City and an amazing reputation for being Grade A sellers (as well as buyers) of great music, especially vinyls.

Yes, there are more music shops here than you can count. Yes, many of those are great record shops for vinyls. But I’d be remiss if I didn’t mention A-1 Record Shop.

Like many spots in NYC, were you to spot A-1 from the street, you might not think anything of it. Its windows are covered from top to bottom in old band stickers. Old milk crates out front on cheap plastic folding tables aren’t exactly screaming that they’re anything particularly important or unique. Even when you step through the door, the first thing you might feel is claustrophobic — it’s a tight squeeze. Then you dive into the baskets and start hunting and you find that incredibly hard-to-find record you’ve always wanted, and every other expectation is blown away like dust off the grooves.

Seeing Sacramento on here could surprise you, but don’t write off the California capital just yet. There are a couple of places here that sell some really good stuff.

Being the middle ground for the Mexican and Canadian borders, as well as being just a short drive from another great music city, San Francisco, a few shops in Sacramento have amassed some impressive collections. Take Kicksville Vinyl & Vintage, Rocket Records and Twelves Wax. Each shop has a unique vibe and specializes in slightly different things, from retro old-school classics to punk to hip hop and funk.

Now let’s get into places that don’t just sell vinyl records; they still press them. These pressing plants are helping to keep the turntables spinning and the music alive.

United Vinyl has been pressing records for 73 years. To give you some perspective, that’s the same year the North Atlantic Treaty Organization (NATO) and Meryl Streep came into existence. Hell of a year.

Nashville is not only one of the greatest places in the world to buy and listen to music but also to make it. And that includes pressing vinyl. In fact, they are the largest manufacturer of vinyl records in the US, pressing out around 60,000 records a day!

If you’re looking for some great spots where you can buy vinyls to add to your collection, local favorites include Third Man Records (owned by Jack White!) and Grimey’s New and Pre-Loved Music.

Georgia is home to some incredible music — the B-52s and Gladys Knight are just two of the remarkably diverse artists who hail from this corner of the country. In addition to boasting tons of places to shop for records, it’s also a place that helps stock the vinyl bins across the world. Kindercore Vinyl, in Athens, started in the ’90s when its two founders wanted to document all the musical happenings in Georgia at the time, and they’ve been doing it ever since for artists all over the place.

Macon’s historic music scene is famous, but you need to come hear the present for yourself.

The city of Burlington is a just cool place to be, so it’s not a surprise that vinyl is a big part of the community. Burlington Record Plant is a record-pressing boutique — with small operations and great attention to detail. One of the newer companies on this list, Burlington Record Plant, began in 2014. With its micro team of specialists, they can put a tremendous amount of care and attention into every single disk they print, ensuring the highest quality for each vinyl that leaves its printing plant and makes its way into all corners of the earth.

Virginia, home of music recording and distribution! Except not really. Virginia is mainly affiliated with either the original thirteen colonies or Jefferson’s infamous plantation. Not quite the heart of music production. But Alexandria’s Furnace Record Pressing is doing great things in this historical state.

Furnace Records Pressing boasts an all-under-one-roof record business. This means they not only press physical vinyls, but they are capable of packaging and shipping them as well! From inserts to jackets to boxsets and slipmats, they do pretty much everything except write and record the music they print. And they do it in quality.

Ah, New Jersey. The home of Ozzy and the Boss must have some stellar record shops and manufacturers, right? Yes. Stereodisk prides itself in using the old machines, restoring and making good on equipment that had its start in the 60s to this very day. The Kenilworth-based business continues the tradition of vinyl on the actual hardware that printed the true classics of yesteryear. And much like Alexandria’s Furnace, Stereodisk not only prints, but they print and package records as well. They even help artists and producers master their tracks specifically for vinyl listening.