Skip to content
Home > Experiences & Adventures > Want to Run Off and Join the Circus? Here’s Where You Can Actually Do That.

Want to Run Off and Join the Circus? Here’s Where You Can Actually Do That.

The state of the world got you feeling down? Some quality trapeze time might be just what the doctor ordered. 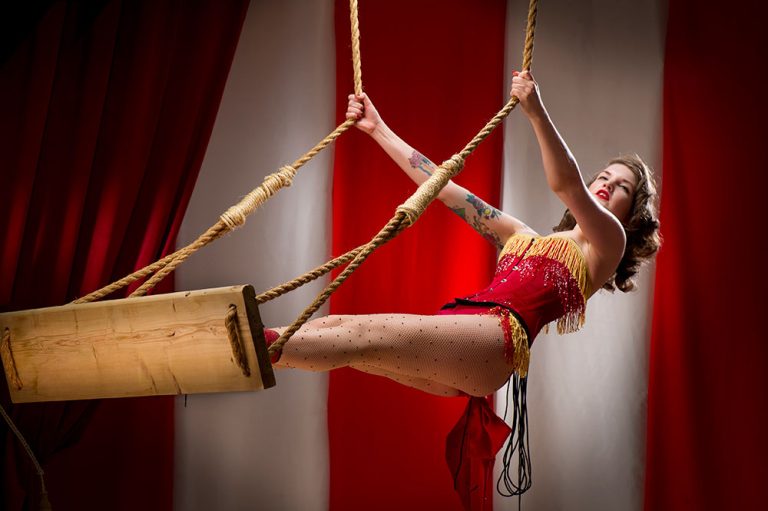 When you turn on the news, are you sucker-punched with sadness and anxiety? Be honest: is your newspaper difficult to read because it’s tear-stained? Are you waiting on Adele to drop a super-sad anthem to commemorate 2018?

We get it. The world is feeling grim with a capital G lately. Which brings us to this: Why not run off and join the circus?

Several schools, boot camps and classes across the United States will train you to become a high-flying acrobat, juggler, clown, unicyclist, tightrope walker or whatever your heart desires.

Afterwards, you’re not limited to putting your skills to practice with, say, Ringling Bros. or Cirque du Soleil. The circus arts are needed in a variety of careers – with jobs that range from stunt doubles in Hollywood to acrobatic feats in Broadway shows to teaching aerial silk fitness classes. (And, just like the safety net below a flying trapeze, there is a circus job board).

So, are you ready for your next act in life – or just looking for a way to infuse some fun and playfulness into a heavy year? Here are five awesome places where you can find training in the circus arts.

The folks at Circus Culture in Ithaca see circus as a hybrid of art and sport, made up of several disciplines like juggling, trapeze and acrobatics. The “about usâ€ section of their website is rather poetic, dripping with some universal life truths, like this: “(Circus) not only includes people of varied skills and abilities, but actually requires this diversity to be whole.â€ And this: “Historically, the circus has been a place where anyone and everyone is welcome and the possibilities of human potential are expanded.”

Circus Culture offers a variety of classes for all ages, plus open practices and memberships. You can also throw your next party here. A popular party format is “Acro and Aerialâ€ that includes tumbling, a mini trampoline, group pyramids, trapeze and aerial fabrics. Plus, Ithaca is an all-around great place to live and its density of waterfalls make it extra magical.

Your first order of business when arriving in Boulder: Get inspired by some of the live street performances playing out along the Pearl Street Mall. Here, you’ll find fire jugglers, contortionists and others with superhuman abilities who are working for tips and wowing crowds. Your next mission, should you accept it, is to immerse yourself in the circus arts at the Boulder Circus Center that made its debut in 2004 and has established itself as a top-notch center that draws visiting international teachers.

Boulder Circus Center was founded by the aptly named Cindy Marvel, a juggler and writer who toured with Lazer Vaudeville, which combines traditional vaudeville acts like juggling, slapstick acrobatics and comedy with cutting-edge special effects like lasers, strobes and black-light illusion. The circus center holds a variety of workshops, including an intro to German wheel gymnastics (think: performing acrobatics in a large wheel).

Brattleboro may be small (population: 11,487), but it boasts a big arts scene and takes the circus arts seriously. Case in point: The New England Center for Circus Arts has two campuses. The Trapezium in Brattleboro, which opened in Aug. 2017, features 40 foot ceilings, a deep foam pit, a trampoline wall, a flying trapeze rig and more. So, you may be wondering how this small town in east Vermont became a mecca for the circus arts?

In 2001, identical twins and world-renown circus performers Elsie Smith and Serenity Smith Forchion settled in Brattleboro and opened up their circus school, teaching lessons in aerial and acrobatic arts and choreographing for top circuses. In addition to classes, camps and private lessons, the circus center puts on epic shows like an upcoming aerial rendition of “The Nutcracker.”

Did you know Illinois State University has its own collegiate circus? Talk about a high-flying higher education. It was founded in 1929 by the school’s gymnastics instructor, and held its first performance in 1931. So, yes, you can go back to school and join the circus, too. The school’s circus performers hold a grand show every April that’s two hours long and includes 15 or more acts, including stilts, unicycles, trapezes, juggling hoops, clowns and aerial performances. On top of that, the Gamma Phi Circus performs 20 to 30 road shows and exhibitions each year for charities, schools and businesses and holds circus camps for kids.

The Suburb Where You’ll Find America’s Only Steampunk Teahouse

This New York circus school in Long Island City gets major bragging rights: “The Greatest Showmanâ€ cast, including Zac Efron, Zendaya and Yahya Abdul-Mateen II, trained here for two months. If you’re serious about breaking into the circus, Circus Warehouse has a year-round intensive professional program for students who want to perform in circus, theatre and cabaret. You do have to apply this program, and the motto at this school is “where the circus pros come to train and teach.â€ A recent student roster includes those ages 18 to 63. Circus Warehouse also offers less-intensive classes and workshops, so you can pop in for a weekend test-run before deciding if you want to go pro.