The 10 States Americans Are Relocating to Most

Texas and Florida lead the way among the fastest-growing states, making huge gains in both gross income and total households 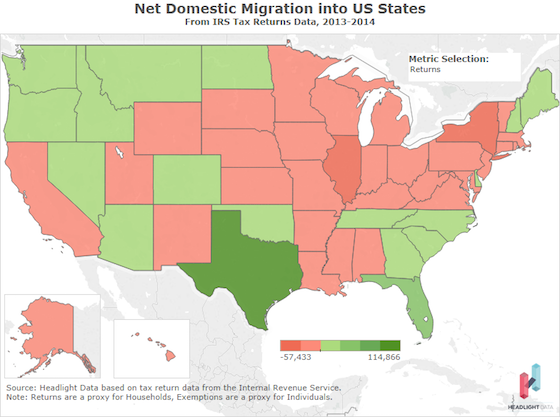 If it seems as if everyone has been picking up and moving to Texas or Florida, it’s because a whole lot of folks have been migrating to both the Lone Star and Sunshine States. New data shows that Texas led the nation in net U.S. domestic migration between 2013-2014, realizing a net gain of more than 106,000 households, almost twice as many as the next closest state, Florida, which itself led the nation in gross income gained (more than $10.6 billion), more than doubling the gain realized by the Lone Star State.

The main reason for the surge in migration to Texas was the development of the Eagle Ford shale formation in the southern part of the state, “which contains $3.4 billion barrels of technically recoverable oil and 20.8 trillion cubic feet of technically recoverable natural gas.” According to EagleFordShale.com, oil and gas companies spent “[a]lmost $30 billion developing the play in 2013” … and “over 116,000 Eagle Ford jobs were supported in the 20 county area impacted by the play.” Lucrative oil & gas jobs are—or were—a great reason to move to Texas; steep declines in the price of oil battered the oil & gas industry in 2015 and 2016, which has no doubt slowed migration into Texas in the past two years. But when the price of oil inevitably recovers, drilling in the Eagle Ford will again provide a massive boost to the Texas economy and encourage another wave of domestic migration.

At the same time, Texas has also become a very attractive destination for retirees. Housing is plentiful and affordable, with Odessa, Lewisville, Cedar Park, Pearland and Frisco among the 5 most affordable cities in Texas. And like Florida—not to mention Washington and Nevada, two other states among the top 10 in net relocations—Texas doesn’t tax personal income, interest income or dividend income, making it especially attractive for those seeking to lower their overall tax burden. Plus, there are plenty of fun and interesting things to do in Texas, and the state is so geographically and culturally diverse that just about anyone can find a city or region that suits their lifestyle and interests.

Retirees and a Prediction

Meanwhile, tens of thousands of retirees are also finding a lot to like about the Sunshine State, as Florida gained 54,524 households in 2013-14. Naples, Venice and Fort Myers are all wildly popular retirement destinations, as is Sarasota, which we recently named the #2 best place to retire in the U.S.

Other states—particularly those in the Pacific Northwest and Southwest—are winning over prospective residents with high marks for livability and/or their mild winters, which explains why Arizona and Nevada are #7 and #9 on the list of most net household relocations, adding $1.1 and $1.4 billion in gross income, respectively. Likewise, there are ample good reasons to move to North Carolina and South Carolina, which both gained circa 13,000 new households according to the migration numbers cited in this article, which were provided by the Internal Revenue Service and compiled by the economic analysis firm, Headlight Data.

I predict, however, that Tennessee, which is #10 on the list (and gained residents primarily at the expense of Illinois, New York, Ohio, Michigan and Pennsylvania) will move up on this list in coming years, as it earns high praise for its diverse and growing economy, not to mention the fact that Nashville consistently finds itself featured on lists of the hottest cities in the country. Looking back in a couple years, the 2013-14 gain of 8,248 households and $861 million in gross income may seem almost quaint by comparison, as more and more individuals are now moving to Nashville, even before having a job lined up. As one newcomer put it, “I didn’t move to Nashville for a job, specifically. I moved for the life.”