The 10 Most Affordable Cities in Utah

Utah is an outdoor adventure paradise — here's where to live without breaking the bank. 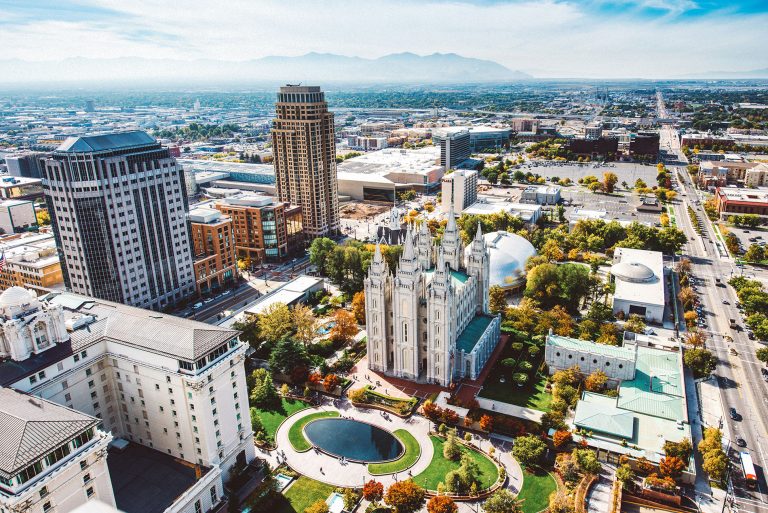 Although known for its scenic beauty, highlighted by five national parks, Utah’s vibrant job market and affordable housing in cities of all sizes make the state more than just an attractive tourist destination.

At the junction of outdoor beauty and urban lifestyle, here are 10 of the Beehive State’s most affordable cities, balancing quality of life amenities with cost of living categories, including housing, groceries, utilities and health care.

Nearby Great Salt Lake, the city’s namesake, is the largest salt water lake in the western hemisphere and largest natural lake west of the Mississippi River. Covering roughly 1,700 square miles, it is so large it has been photographed from the International Space Station.

Thanks to its affordability, outdoor attractions and high-quality health care, SLC also nabbed a spot on our list of the 10 Best Places to Retire.

The suburban opposite of Bountiful, at least in terms of geography, is Murray, a city of 49,230, about 12 miles south of Salt Lake City.

Best Places to Live in Utah

Looking for the best places to live in Utah? We’ve got you covered.

Bountiful is a northern suburb of Salt Lake City, a mere 12 miles from the capital city.  As such, it shares much of the metro amenities such as shopping, dining and entertainment with the surrounding area.

On business and industry rankings, Orem often shares billing with nearby Provo. Forbes listed the combined Prove-Orem area as the best metro area for jobs in the country in 2017.

Orem has a population of 97,499 with a median housing price of $207,400, close to that of Provo, although the median household income was significantly higher at $55,166.

Orem is home to Utah Valley University, which began as a vocational school in the early 1940s and then transitioned to a community college, before becoming a university that now has more than 37,000 students.

The home of Brigham Young University, Provo is listed among the 10 Best College Towns. The campus community contributes to the vibrant mix of restaurants, live music venues and downtown nightlife.

Provo also is high on the business radar, ranking among the Best Cities for Entrepreneurs.

With a population of 116,868, Provo is the third-largest city in Utah and the largest in Utah County. Provo, tucked between Utah Lake and the Wasatch Mountains, has been listed among the Best Affordable Places to Live.

The median housing price was $204,700 and the median household income was $41,291. The 25-acre Provo Downtown Historic District is listed on the National Register of Historic Places.

College athletics is a large part of the Provo social scene. Since 2012, the BYU Cougars have competed in the West Coast Conference. The Cougars football team has been an almost-annual participant in a bowl game since the mid-‘70s. The men’s basketball team, which plays on campus in the 18,987-seat Marriott Center, has made 29 NCAA tournament appearances.

The home of Utah State University, this city of 50,676 is located in Cache Valley, nestled among the Wasatch Mountains about 85 miles north of Salt Lake City. The university is by far the largest employer in the county, with Logan Regional Hospital also among the larger employers.

Located away from the main population centers, the median home price in Logan was $161,900, with a median household income of $36,032. The Cache County School District was ranked No. 4 in the state.

The Center Street Historic District features many houses dating back to the 1860s. The 160-acre American West Heritage Center, a living history attraction, is about six miles south of Logan. The Logan Canyon Scenic Byway, a Utah and National Scenic Byway, which begins at Logan and follows U.S. Highway 89, is a favorite of fall color watchers.

One of the smaller cities on the list of most affordable, American Fork is a double suburb in Utah County, about 30 miles south of Salt Lake City and 15 miles north of Provo.

The median home price of $221,700 is in keeping with the general area, as is the median household income of $65,101. The Alpine School District is ranked in the Top 10 in the state.

Without driving too far in either direction along I-15, one of the most popular local attractions is Timpanogos Cave National Monument, where visitors can tour the cave.

With a population of 75,655, Layton is the largest city in Davis County, about 25 miles north of Salt Lake City and 15 miles south of Ogden. It is an easy drive to all of the amenities and attractions that Salt Lake City has to offer.

Hikers flock to the Adams Canyon Trail. The SeaQuest Interactive Aquarium is another popular destination.

Located in the southwestern part of the state on the border with Arizona, St. George sits where the Mojave Desert meets the mountains. St. George is about 120 miles northeast of Las Vegas, and 300 miles southeast of Salt Lake City. With a population of 82,318, it is the largest city outside of the Wasatch Front, which includes Salt Lake City and the surrounding geographic area.

If outdoor adventure is your #1 priority, these small cities are the perfect home base.

Located at the base of the Wasatch Mountains, about 20 miles south of Salt Lake City, Sandy is Utah’s sixth-largest city with a population of 95,836.

The median home price is $277,600 with a median household income of $79,491, but home values have increased about 7.7 percent in the past year, according to Zillow. The Canyons School District, the area’s largest employer, is ranked among the Top 10 in the state.

In 2015, the city announced ambitious plans for The Cairns, an 1,100-acre city core development designed to connect mountain adventure with an urban lifestyle. The master plan includes housing, retail, dining and entertainment, as well public spaces and trails. Sandy also is the site of soccer-specific Rio Tinto Stadium, home of Real Salt Lake of Major League Soccer, and hosts an annual Balloon Festival.