Skip to content
Home > WA > Tacoma > Where to Live Now > Why Tacoma, WA is a Best Place to Live

Why Tacoma, WA is a Best Place to Live

A welcoming city that offers residents some of the best amenities in the U.S. 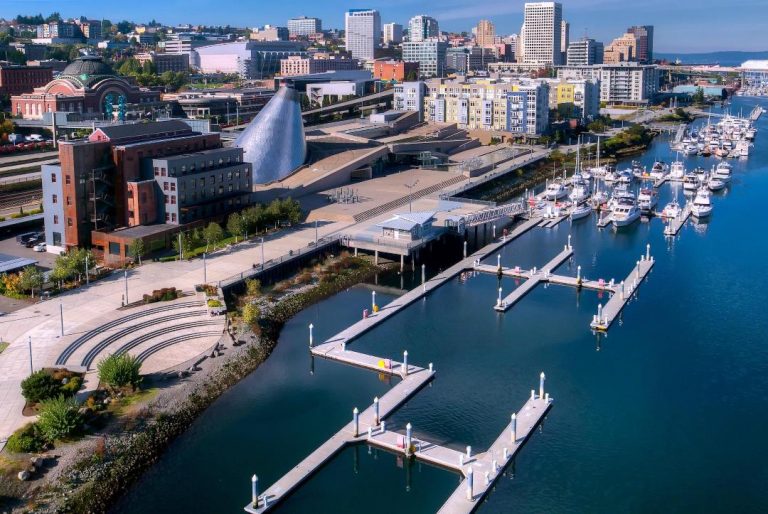 Tacoma, Wash., is sometimes referred to as the City of Destiny, but it might best be described as the city of diversity, as it’s filled with vibrant neighborhoods that span a wide array of ethnicities, backgrounds and income levels. It’s also an international waterfront port city (and a gateway to the Pacific Rim), and many residents consider it an urban college town thanks to its four universities and thriving community colleges. Regardless of the label one uses, Tacoma offers residents amenities envied by metropolitan areas many times its size.

“Residents have a very high quality of life here because you’ve got clean air, mountains and miles of shoreline, plus the city is very walkable,” says Mayor Marilyn Strickland. “You have all the amenities of a [big] city, but it’s not a hassle to get around and do things.”

Tacoma has one of the finest city park systems in the U.S., headlined by Point Defiance Park, a 760-acre gem that features a zoo and aquarium, the only combined zoo and aquarium in the Pacific Northwest; the Fort Nisqually Living History Museum, which features local artifacts dating back to the mid-1880s; and Owen Beach, a saltwater beach on Puget Sound that offers views of Vashon Island, not to mention picnic shelters and kayak rentals. Yet another fine spot to spend an afternoon is Wright Park, a 27-acre downtown park that includes the W.W. Seymour Botanical Conservatory (est. 1908), which displays more than 250 plant species from around the world.

Tacoma is also home to a spectacular assortment of museums. Car lovers gravitate to America’s Car Museum, which includes more than 250 automobiles spanning more than a century of automotive history. For art lovers there’s the Tacoma Art Museum, which primarily exhibits works by artists from the Northwest, as well as the Museum of Glass, which showcases 20th- and 21st-century works and features the Hot Shop Amphitheater, where visitors can watch artists create art from molten glass. Meanwhile, those who appreciate local history will adore the Washington State History Museum, which offers interactive exhibits that bring people and places from the past to life. Much the same can be said of the Job Carr Cabin Museum, “a replica of Tacoma’s first permanent non-Native residence,â€ which permits visitors to see the space much as it would have looked in the late 19th century. Last but not least, the Children’s Museum of Tacoma is the epitome of fun as its “mission is to honor children and champion play, [and] celebrate the power of play in the lifelong journey of learning.”

In addition, Tacoma has a thriving arts scene, led by the nonprofit Broadway Center for the Performing Arts, which presents world-class artists and provides a home for many local performing arts organizations, including the Tacoma City Ballet, Tacoma Opera and Tacoma Symphony Orchestra. Equally vital is the Tacoma Musical Playhouse (the largest community theater in the Northwest), which specializes in musical theater and produces six Broadway-style musicals per year.

As for the future, Mayor Strickland expects Tacoma’s international profile to continue to rise, thanks in part to the contributions of foreign-born residents who make up 15 percent of the local population.

“We are a city that welcomes immigrants because we understand their contributions to communities,â€ Strickland says. “But the thing that makes Tacoma the best is the vibe and the people here. We are no-nonsense and down-to-earth, and what you see is what you get. Come as you are. There is a place for everyone here.”

The thing that makes Tacoma the best is the vibe and the people here. We are no-nonsense and down-to-earth, and what you see is what you get.