Why Orlando, FL is a Top 100 Best Place to Live

Spoiler: There's a lot more than Disney in the City Beautiful. 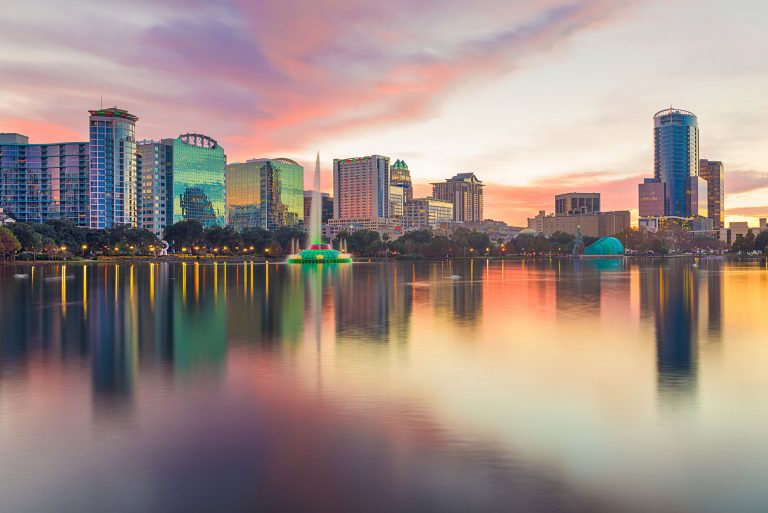 The largest city in Florida without beachfront property, Orlando is also the only inland city in the state to rank in our latest Top 100 Best Places to Live list. So how does it do it?

Despite the lack of coastline, Orlando offers ample fun in the sun, thanks to dozens of lakes, parks and thrill rides, so you’ll hardly miss the ocean. And if you do, Cocoa Beach is a mere hour away.

Add to that a booming job market, educational opportunities, and affordable housing, and it’s no wonder Orlando is considered one of the best places to live in America.

Orlando wasn’t always so popular. In the 1960s, it was pretty much swampland, but a savvy entrepreneur, Walt Disney, saw opportunity. The land was cheap, I-4 was under construction, and the weather was fine year-round. So he purchased thousands of acres to build Disney World, which just celebrated its 50th anniversary in 2021.

SeaWorld came along two years later in 1973, setting up shop less than 10 miles down the road from Magic Kingdom. By the time the Orlando airport opened in 1981, the city was fast becoming a global destination. Yet another park, Universal Studios Florida, joined the scene in 1990, solidifying Orlando’s reputation as the Theme Park Capital of the World.

Discovery Cove, for example, offers an all-inclusive day resort where you can snorkel among tropical fish, feed birds in a free-flight aviary, and float away from your cares on the lazy river. Crayola Experience, a celebration of all things colorful and creative, is perfect for the under 10 crowd. And there are plenty of places featuring carnival rides, go-karts, putt-putt and midway games if that’s more your speed.

The perfect weather and permanent vacation vibe are only the beginning

On International Drive, or I-Drive, you’ll find dinner shows, alligators, outrageously themed restaurants and the massive ICON Park with its famous 400-foot-tall observation wheel. ICON Park also boasts its own set of attractions, such as the mind-boggling Museum of Illusions, where you can step inside optical illusions, including an infinity room, and take fantastical photographs that will astound your friends.

Long story short, you could visit a different attraction in Orlando every day of the year and still have more to see.

Orlando has come into its own over the past several years as a place not just to vacation but to truly call home.

For art lovers, Loch Haven Cultural Park features museums, the philharmonic, the Orlando Ballet, theater companies and a sculpture garden. Explore the treasures at the Orlando Museum of Art, one of the oldest art institutions in Central Florida, which includes several interactive experiences for families throughout the museum. The exhibits are constantly changing, and they’re especially committed to diversity, so there’s always something new.

When it comes to nightlife, the city has dozens of clubs and bars, including a vibrant craft cocktail scene. And getting around is easy with the SunRail, the free LYMMO bus system, and both scooter and bike-share programs.

When it comes to Orlando being a great place to live, the secret is out. Realtor.com has named it one of the fastest-growing metro areas, with homes selling quickly and demand exceeding inventory.

But living here is still affordable. The median sales price for houses is $327,000, over 20% less than the national median. Renting a one-bedroom apartment will set you back around $1,600, less than the national average but still over 30% higher than last year. Top neighborhoods to call home include Lake Eola Heights, Audubon Park, Baldwin Park and Lake Ivanhoe.

Thinking of moving to Orlando? From rent to groceries to lattes, here’s how much it will cost you.

The metro area is growing, too, numbering over 2.6 million residents, many coming for jobs. And those jobs aren’t just in tourism. Orlando is positioning itself as a tech hub with industries like aerospace, IT, fintech, photonics and biotechnology, fueled in part by a highly educated workforce. There are more than 30 colleges in the Orlando area, including the largest in the country, the University of Central Florida.

With access to top schools, jobs, transportation and entertainment — and no state income tax — Orlando is expected to continue to grow over the next decade, some experts even theorizing it will blend with Tampa (another of our Best Places to Live) as an economically charged “megaregion” in Central Florida.