Trust us on this. 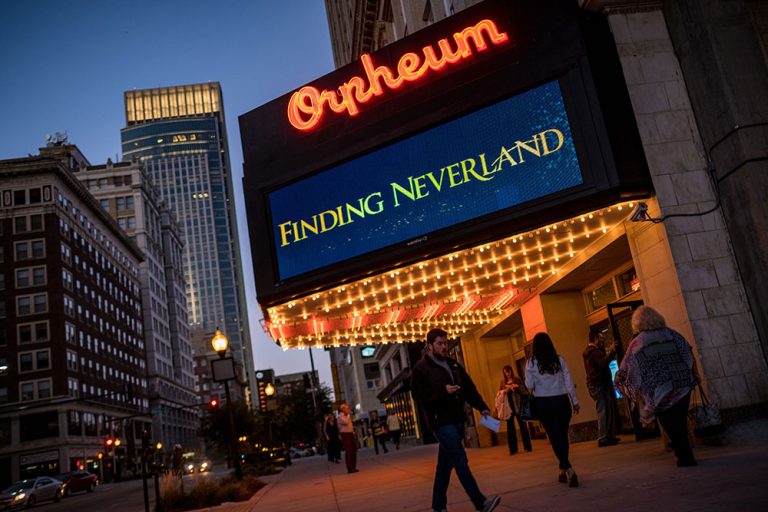 It’s a travel experience that ranks high on many people’s bucket lists: a trip to New York City to see a Broadway show, eat amazing food and stay at a fancy hotel. To, as George Costanza might say, “do it classy.”

Which is why I’m going to suggest something fairly radical. If you can’t afford to do the swanky NYC weekend thing at the moment (and hey, not many of us can!), you should re-route and do a swanky Broadway weekend in Omaha, Nebraska, instead.

A few months ago my husband and I took a trip to Omaha to experience the city’s food and theater scene. Our goal? Recreate a swanky NYC theater experience … in Nebraska. I had never been to Omaha, and I had no idea what to expect. One thing that struck me right off the bat was how much was going on in the city: when we were in town, there was a Broadway show, comedy shows, multiple jazz performances, art openings, underground gallery shows, poetry readings and more. We knew we were going to see the musical “Come From Away,â€ but honestly, if we didn’t have tickets before arriving in Omaha it would have been really difficult to choose how to spend our evenings. The entertainment options were endless.

Everyone I talked to said this packed schedule of events is par for the course. From theater to music to art and literary events, “There’s a lot more going on here than most people realize,â€ was a common refrain.

We stayed at Hotel Deco, a boutique hotel located in downtown Omaha, right across the street from the Orpheum Theater (more on that later). This place is absolutely gorgeous, from the downstairs bar and lobby area that feels like a “Mad Men” set to the luxurious rooms with views of the Old Market District and stunning Midwestern sunrises.

The staff was funny, kind and thoughtful, and the hotel even offers a complimentary shuttle that takes guests anywhere in the city. You won’t need to get in the car to get to the theater or many of the city’s best restaurants and bars, but I highly recommend hopping in the shuttle for a field trip to the Blackstone District while you’re in Omaha. It’s a cool neighborhood with unique boutiques, restaurants and coffee shops that’s perfect for an afternoon of exploring.

(Check out a tour of my room at the Hotel Deco here!)

One night at a comparable theater-district hotel in NYC: $250+
One night at the Hotel Deco in Omaha: $116/night

Last year, Livability deemed Omaha the best place to eat in America. There are so many reasons why the city has earned this title, from innovative chefs creating seasonal, locally sourced menus to the world-famous steakhouses, but to truly understand how good the food is here, you need to experience it for yourself.

We spent three days in Omaha and at every single restaurant we went to, my husband and I paused during the meal to say, “This is some of the best food we’ve ever had,â€ and after the meal when the check came to say, “Wait, is this price correct?â€ The food in Omaha is not just off-the-charts good, the price point is much lower than you’d pay for similar meals in other cities.

We ate the best steak of our lives (obviously) at Monarch Prime, amazing oysters and seafood at Plank, French pastries at Le Petit Paris, burrata and chicken liver mousse at Stirnella, authentic Neapolitan pizza at Dante and “farm-to-coneâ€ ice cream at Coneflower Creamery.

For our fancy, pre-show meal, we got dolled up and walked to Le Bouillon, where we ordered appetizers, oysters, entrees, wine and dessert. We went all out, y’all.  The final price for this extravagant dinner for two? About $120.

No matter what big-name show you’re dreaming of seeing live, chances are it’s going to make a stop in Omaha. From “Lion Kingâ€ to “Hamiltonâ€ to “Dear Evan Hansenâ€ and so many more, the city’s iconic Orpheum Theater hosts a packed schedule of massive productions and intimate performances.

We saw the musical “Come From Away,” which enjoyed huge success on Broadway and has been touring nationally. It was funny and quirky and heartwarming, and seeing it at the Orpheum made it that much more special. The Orpheum Theater is a stunning, historic space that honestly deserves a spot on every traveler’s bucket list. Built in 1927 and restored and updated to the tune of $10 million in 2002, the Orpheum’s ornate ceilings, chandeliers, carved fountains and red velvet curtains make any experience feel luxurious, and as much as I hate to say it, highly Instagrammable.

The night after we saw “Come From Away,â€ we went to see a jazz show at The Holland Center, another performing arts space in Omaha which couldn’t be more different from The Orpheum. The Holland is a bright, modern space with incredible acoustics. The fact that the city has two venues of this caliber, and with totally different atmospheres, speaks volumes about the arts scene here.

After the show, we walked across the street to a nondescript liquor store called The Looking Glass next door to Hotel Deco. We told the guy at the counter, “We’re looking for the wicked rabbit,â€ and he pointed to a bottle on the shelf. “Pull that bottle,â€ he said, and when we did, the whole wall opened up to reveal an “Alice in Wonderlandâ€-themed speakeasy called – what else? – The Wicked Rabbit, all purple velvet and dark booths and fishnet-clad servers slinging flaming drinks. It’s just as cool as it sounds and the perfect place for a post-show nightcap.

Cocktail at an NYC speakeasy: $18
Cocktail at The Wicked Rabbit in Omaha: $13

Omaha isn’t New York City, and it doesn’t claim to be, but if you’re willing to think outside the box, this Midwestern city is the perfect destination to get dressed up, eat amazing food and enjoy an unforgettable night out at the theater – without breaking the bank. While you save up for NYC, I’d highly recommend booking a trip to NE.