With a robust economy and plenty to do on the weekends, the region attracts top talent. 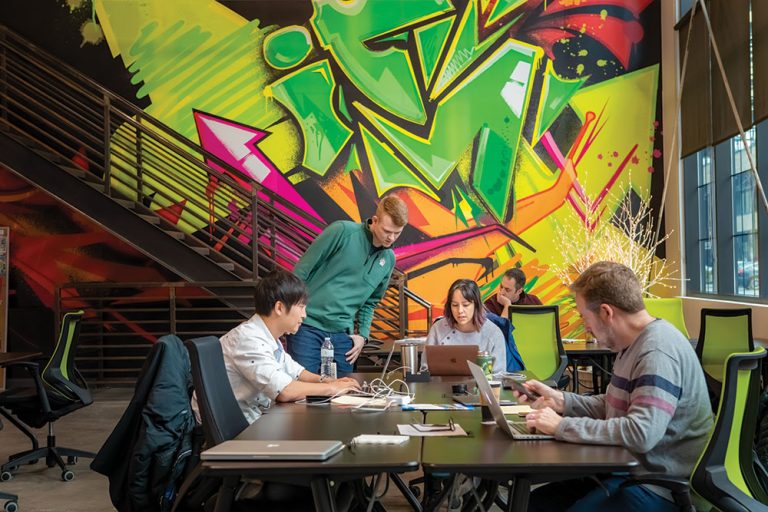 When electrical engineer Ava Norberg moved to Madison, she quickly noticed her new city’s love for the outdoors. Now, she’s running, biking and hiking more than ever.

“I’m healthier and happier for it,” says 28-year-old Norberg, who relocated to Madison from Indianapolis in the fall of 2017.

The Madison Region is a magnet for young professionals like Norberg, offering plenty of amenities and opportunities to attract top-notch talent. In addition to an abundance of trails that are well-suited for outdoors lovers, the region also offers a low cost of living, plenty of career advancement opportunities, a lively arts tradition and a robust dining scene, not to mention a range of lifestyle options, from the high-density neighborhoods near downtown Madison to the small-community ambience of cities such as Beloit in Rock County and Baraboo in Sauk County.

Unique local retail and restaurants are part of the charm of downtown Baraboo, home to more than 160 businesses that employ more than 700 people.

Downtown Beloit was one of the first communities in Wisconsin to receive the Wisconsin Department of Commerce’s Main Street Program designation in 1988.

Billing itself as a “small town with an urban flair,” Beloit is rich in arts and culture experiences, including an annual Arts Walk that draws more than 100 artists.

Why Millennials Are Moving to Madison, WI

Young people from around the country are flocking to Madison. Here’s how a midwest college town became a millennial hotspot.

The downtown, on the banks of the Rock River, boasts over 120 hanging baskets and urns on treelined streets, bike paths and a public canoe/kayak launch to encourage walking, biking and skating.

Thanks to many of these attributes, the Madison Region consistently ranks as one of the best places to live.

As an example, Madison placed No. 3 on Livability’s Top 100 Best Places to Live list in 2019. The National Association of Realtors ranked Madison as the No. 2 relocation destination in the U.S. for those who were born between 1980 and 1998.

The region offers a number of compelling reasons to be a destination for young professionals to establish and advance their careers.

The Madison Region’s economy is highly diverse, including technology-driven sectors in advanced manufacturing and food production, financial services, life sciences and health care, and information technology. Newcomers can easily find a career that matches their skill sets here.
Norberg moved to Madison to take a job with Isthmus Engineering, working in the automation industry. Her company designs and builds custom manufacturing machines for a variety of customers and industries.

From job opportunities to social circles to breakfast tacos, here’s what inspired people to settle down in their college towns.

In contrast to cities like San Francisco, Seattle, Boston or New York, the cost of living in the Madison Region is appealing to those who work in high-tech industries. Plus, it’s easy to get around the region’s communities, with commute times averaging 21 minutes.

Norberg chose to live in the heart of downtown when she first moved to Madison, and her home near the Capitol Square allowed her to explore restaurants and bars in the neighborhood. She’s since moved closer to Madison’s east side.

“The neighborhoods feel homey,” she says. “It’s always an adventure to walk through the summer festivals and see the outdoor concerts.”

The walkable neighborhoods are a perk, too.

Madison is a perfect match for Stephanie La Haye, 32, who moved to the city in August 2018.

“I was interested in Madison because of the overall vibe of the city,” she says. “It seemed like the perfect spot for someone who’s in their 30s, is a professional, loves the outdoors and has an active lifestyle.”

Originally from Milwaukee, La Haye has found a career she loves, working as a grants specialist with the Office of School Safety within the Wisconsin Department of Justice.

Since moving to the region, she’s joined the Madison Ultimate Frisbee Association. She’s also a volunteer with the Dane County chapter of the Ice Age Trail Alliance and enjoys doing yoga by the lake.

Plus, there’s plenty to do on the weekends, thanks to a diverse arts and culture scene that makes Madison a haven for creative types and a destination for visual and performing arts.

Madison has the culinary arts covered, too, with the region producing 27 James Beard Award nominees.

Madison’s credentials as one of the most bike-friendly places in the country is a plus, too.

“I love the bike-ability of Madison,” she says. “I never have to drive anymore. Madison is so bike friendly, and you can really see the intention that went into planning a city to operate with pedestrians and cyclists in mind.”