What is this magical land of cheese, cheap rent and a record number of water slides? It's called Wisconsin. 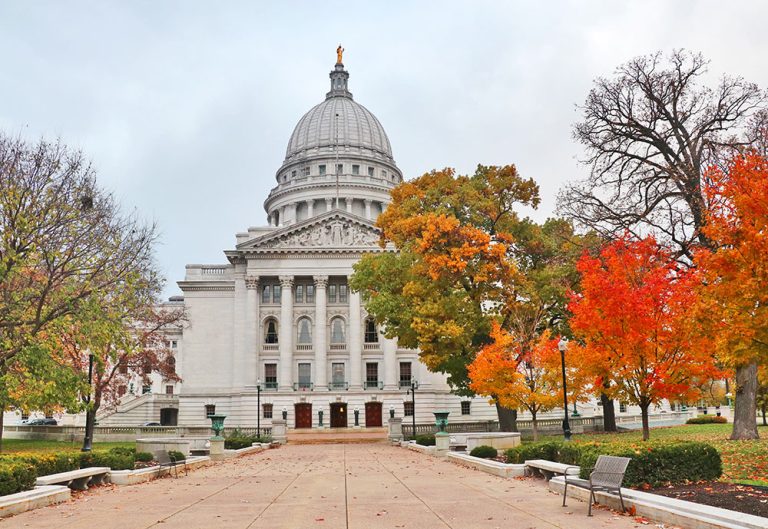 With shores on both Lake Michigan and Lake Superior and a border with the Mississippi River to the west, Wisconsin is a Midwestern gem. Three Wisconsin cities, Madison, Appleton and Eau Claire, clocked in our our 2019 Top 100 Places to Live list, and numerous cities in the state have made high-ranking appearances on a bevy of other Livability.com rankings, from Beer Cities to Best Cities for Recent College Grads. Home to Miller Brewing, Harley-Davidson, Kohl’s and Northwestern Mutual, in addition to a thriving startup culture, Wisconsin has plenty of job opportunities. Combine all that with the famously friendly Midwestern vibe, and you’ve got a state that’s just beckoning you to move there.

Need a little more convincing? Here are 10 reasons you should consider moving to Wisconsin:

The state produces three million pounds of cheese a year in 600 varieties – more than a quarter of all cheese produced in the United States. We’re the only state to have a licensed Master Cheesemaker program modeled after those in Europe and the only state to require a licensed cheesemaker supervise all production. At the 2016 World Cheese Championships, Wisconsin cheese earned 127 awards, with 40 of them first places in their class, and a cheesemaker from Fitchburg took the title of world champion. They accounted for nearly 40% of the awards given. Want a taste (literally) of this cheese wonderland? Come to Wisconsin.

From cheese hats to “cheese orphans” to gourmet gas station cheddar, here’s how to experience Wisconsin’s epic cheese scene like a hungry local.

2. Madison is consistently ranked one of the best places to live in the country.

Since 2014 Madison has scored a coveted spot on our Top 100 Best Places to Live list. The state capitol and home to the flagship University of Wisconsin, the city is a unique mix of politics and academics. It’s consistently rated as one of the best college towns in the country and that youthful energy attracts young professionals to the area post-grad. Perched on an isthmus between two lakes and boasting 10 state parks within 60 miles, there’s also a ton to get out to see and do near Madison.

Milwaukee is known as the City of Festivals and that’s a great place to start, but there’s actually amazing food, music and seasonal festivals all across the state. The gem in the crown is Milwaukee’s Summerfest. The 10-day music festival is the largest in the world. It takes place at a 75-acre festival grounds on the shore of Lake Michigan and has 11 stages and more than 1,000 performers. That same spot is host to numerous ethnic festivals over the course of the summer. Elsewhere in Wisconsin, there’s the Eaux Claires music festival, La Crosse’s Oktoberfest, Bayfield’s Apple Fest and so many more.

4. Housing costs are well below the national average.

Housing costs in Wisconsin are extremely affordable and nearly 15% below the national average. Bestplaces.net puts Wisconsin rents at $200-$500 less than comparable homes/apartments in other cities. Housing costs drop significantly in the central and northern parts of the state. Milwaukee and Madison pull the average up, but housing in Green Bay and Appleton are more than 20% lower than the national average. Put the money you save on rent into your “music festivals and cheese” budget instead.

5. The place is sports crazy.

Ever seen a major city look like a ghost town during the middle of the day? You’ll find that phenomenon in every city in Wisconsin if you head out during a Packers game on Sunday. Football is religion here in a way you don’t normally see outside of the South. The Wisconsin Badgers have been a perennial contender in football and men’s basketball, as well as women’s ice hockey and cross-country. The Brewers and Bucks are both young squads looking to build legacies. The Admirals, an affiliate club for the Nashville Predators, are based in Milwaukee. The Brewers’ single-A affiliate is in Appleton and the Northwoods League summer baseball league has teams throughout the state. If you’re into sports, you’ll have teams to cheer year-round. If you’re not into sports (yet), move here and see how long you can hold out – the enthusiasm is contagious!

From organic farms to world-class restaurants, here’s how the tiny town of Viroqua became a foodie hotspot.

6. Farm-to-table has a whole new meaning when half the state is devoted to farmland.

You might think of beer and brats when you think of Wisconsin cuisine, but to pigeon-hole it that way would be a disservice. With access to so much fresh food – from produce and dairy to fish, cows, pigs and more – it makes sense that great restaurants have been popping up across the state – and not just in the big cities. Luke Zahm of The Driftless Cafe in Viroqua was a 2017 James Beard Award nominee for Best Chef: Midwest. At Ardent in Milwaukee, the beef comes from cattle that are raised by the chef’s dad and the aprons are sewn by his mom. In Madison, L’Etoile, Forequarter and Heritage Tavern are all recent James Beard nominees. Enjoy the beer and brats, sure, but save room for upscale cuisine too, because Wisconsin has it all.

7. You’ll never want to be indoors.

With 47 state parks, 13 state forests, 76 state wildlife areas, 84,000 river miles and 15,000 lakes, the Dairy State is a outdoor enthusiast’s dream. Wisconsin is full of interesting and unique geography to explore. The Driftless region in the southwest part of the state features rolling hills that were not affected by the last glaciation. The Niagara Escarpment along the east side of the state that creates sharp cliff faces (and goes on to form the Niagara Falls out east). The Ice Age National Scenic Trail is a thousand-mile footpath in Wisconsin that highlights some of the unique landscape formed by glacial ice flow more than 12,000 years ago. The Elroy-Sparta trail is the country’s oldest rails-to-trails path. There’s literally no excuse to ever be bored or stuck inside in Wisconsin.

8. Wisconsin is on the forefront of freshwater technology.

The Great Lakes contain 84% of North America’s surface freshwater and 21% of the world’s supply of surface freshwater. Wisconsin has gone all-in on becoming the freshwater capitol. The University of Wisconsin-Milwaukee has the only graduate school program in the country dedicated to the study of freshwater. Located at the confluence of three rivers and on the shores of Lake Michigan, Milwaukee is one of only two North American cities in the elite list of 13 worldwide United Nations Global Compact Innovating Cities. The region is home to more than 150 water-related companies and has become an incubator for water-related startups. Nearly two million people worldwide live in areas where water is scarce and 20% of the world’s population lacks access to clean water. Milwaukee – and southeastern Wisconsin as a whole – are quickly becoming the Silicon Valley of water technology.

We know it sounds borderline blasphemous to skip beer in Milwaukee, but here are 10 delicious reasons to sip something new.

9. The state’s historic buildings have stories to tell.

Whether you’re marveling at the “wings” of Santiago Calatrava’s addition to the Milwaukee Art Museum or finding inspiration at Frank Lloyd Wright’s Taliesin, you’ll fall in love with Wisconsin’s architecture. Milwaukee’s City Hall dates to 1895 and the Grant County Courthouse’s glass and copper dome was finished in 1902. Wright, who grew up in Wisconsin, has left touches across the state, from personal homes and cottages to the Annunciation Greek Orthodox Church in Milwaukee, Monona Terrace in Madison, and the SC Johnson buildings in Racine. Opera Houses in Oshkosh and Stoughton reveal turn-of-the-century ornate interiors and the Pabst Theater in Milwaukee, completed in 1895, is the fourth-oldest continuously operating theater in the United States.

10. It’s the water park capital of the world.

In literal terms, the Wisconsin Dells are a unique formation of sandstone that form a 5-mile gorge on the Wisconsin River. To Midwesterners, Wisconsin Dells is a city northwest of Madison that is beloved summer tourist destination. The tourist market that sprouted here after the railroad came through is now home to more than 200 water slides (you read that right: two hundred). Noah’s Ark is America’s Largest Water park – it sits on 70 acres and has three total miles of water slides. The Wilderness Resort has the country’s largest indoor/outdoor combination water park with a footprint greater than 12 football fields. In other words, when you pack your suitcase, don’t forget your swimsuit.