Getting around Palo Alto is pretty easy, thanks to the city's bike-friendly nature and various public transportation options. 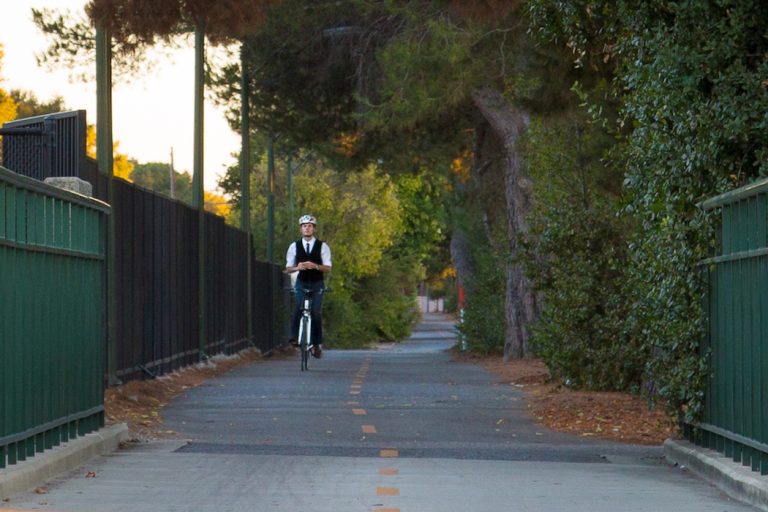 Palo Alto / Courtesy of hjl under a CC 4.0 license.

I'll start by saying that I drove into town from the San Jose airport. When doing on-the-ground reporting, a car is usually necessary. I had a lot of territory to cover and not a whole lot of time. However, I also wanted to get a sense for what it felt like to actually be a Palo Alto resident – after all, we said it was the Best Place to Live, not best place to hole up in a hotel. I took a couple of steps to accomplish this.

I stayed in a guest room rented via AirBnB. I’ve written about how sharing resources is to some degree reshaping our cities and our economy. In some cases, that is bike-shares providing a citywide public good for people to take advantage of. Or car-sharing allowing people access to cars without the overhead of owning one full time. After all, cars sit parked for the vast majority of the day. AirBnB allows property owners to rent a room, a guest house or whatever extra space they have to travelers.

So I stayed in one of Palo Alto’s neighborhoods on a residential street rather than in a downtown hotel. It was basically a flawless experience, and my host family was great to chat with about the town as I came and went. The yard between the cozy guest house and the main house featured an impressively kept garden, and I was able to sit at a table in the evening beneath a redwood, listening to crickets, frogs or something as I typed up my day’s notes. Planes came and went, perhaps to San Jose, San Francisco, Oakland or any of the smaller regional airports.

To get around like a local, I rented a bike from my hosts. I used that to do some exploring. Palo Alto is a very bikeable city. Even many of the wide, slow residential streets have dedicated bike lanes. For families, this can become a principal mode of transportation for getting to school. As we’ve been saying, the public school system is incredible, which means that even those who could afford to send their kids anywhere in the world to school often send them to the public schools alongside their neighbors – who, granted, are also doing pretty well financially. With so few families opting-out and with almost no busing, you see hordes of kids commuting on foot and pedal each morning. For the elementary school kids, that means mom and dad are biking with them, dropping them off and either heading back home to their cars or continuing on their way to work. The middle and high school kids arrive unescorted, which likely seems unreal to city parents where traffic, distance and even gang violence are a fact of life.

Palo Alto: One of the 10 Best Places to Raise a Family in America

One resident told me his son gets home from after-school obligations via yet another form of transportation. When his parents are tied up with work events in the evening, he’ll use the Uber smarthphone app to hail a town car and driver.

Transportation on the whole is a constant concern for residents here. The commuter rail Caltrain brings workers in and out. Those are younger workers at the high-tech companies who can’t afford to live here (yet) and service workers employed by the hospital, university, and the residents themselves. Those who drive have a couple of major freeway options to get around the valley, and between San Jose and San Francisco. Parking is an issue as more people spend more time in the downtown. The city is also incredibly walkable with several major retail clusters located just a street or two away from residential and park space.

Most of Palo Alto is, of course, suburban. There are increasingly businesses and startups moving into spaces previously occupied by retail along University Ave. corridor, according to Chamber director David MacKenzie. We chatted in the chamber’s offices near a major bus-train transit hub in the city’s northwest corner. The younger workers, he says, want to be right near downtown. Some are legitimately there, like Survey Monkey and Flipboard. Others just want to seem like they are part of the city. “We had two people come in last week who wanted to join the chamber. I said 'give me your address; I’d like to see your offices,' and they said 'you can’t do that, it’s just a mail box,'” he says. “The idea of having a Palo Alto address is something we just had to have.”

The area around University Ave. used to be mom-and-pop retail. Some of that is still here, like What’s Shakin, an old-school burger joint that is one of the strip’s oldest businesses. Now, much has been replaced by high-end chains like West Elm, Restoration Hardware and an Apple Store. The California Ave. stretch is more of a throw-back to what Palo Alto looked like years ago, but that’s changing, too. Plans are in place to revitalize that section of Palo Alto.

While visiting, I heard a lot about change. I heard about the tensions and opportunities from rising real estate costs. I heard about the addition of businesses in the previously retail areas and the related for higher density, both internally and from a regional planning authority. I heard about how great a high-speed rail corridor would be, as long as it doesn’t’ cut the community in half. I heard about an affordable senior housing project that the city approved but voters have now shot down. I heard about conflict over zoning and the tear-down of older homes. I heard about the new Jewish Community Center, which was developed along the principals of New Urbanism, but whose design is celebrated by some while irritating others.

In other words, I heard a lot of discussion about livability and what path Palo Alto will take moving forward as residents strive to keep it a great place to live, work, and visit. Whatever they do, I think they're on the right track.

For more on why Palo Alto is a great place to live, see our multimedia tour with photos, videos, audio and more.