The state’s first hospital builds on legacy of service. 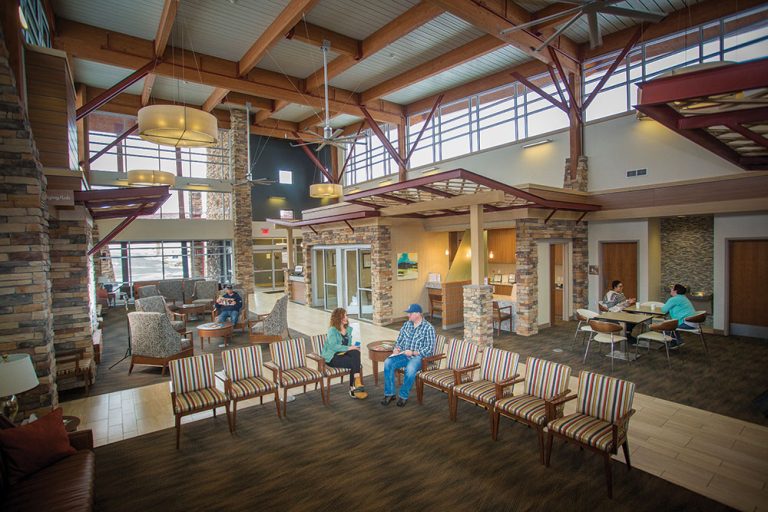 When the cornerstone for Wyoming’s first hospital was laid in 1893, the Rock Springs community turned out in force to mark what the local paper saluted as “a day of suspension from labor and rejoicingâ€ on which “nothing has ever occurred in this city that can compare with it in bringing forth good fruits to mankind.”

The hospital celebrated its 125th birthday in 2018, and today looks back on a legacy that has made it a landmark in Rock Springs and Sweetwater County.

“We’re the cornerstone of the community really, the only provider of full-service inpatient/outpatient care in the area and one of the biggest employers in the community,â€ says Irene Richardson, hospital CEO. “We do great things. We want to be here for our community.”

The hospital has undergone a myriad of changes in its long history. It began life as Wyoming State Miners’ Hospital in 1893 and became Wyoming General Hospital in 1895. Just two years later, the facility burned down, but was rebuilt on the same site and reopened in 1898.

In 1978, a new $10 million hospital building opened its doors in the midst of heavy snowfall. Patients successfully transferred to the new building that day, including a woman in labor and a paralyzed patient.

Today, the 99-bed, nonprofit hospital offers services in three different locations. In 2014, it opened the 80,000-square-foot facility that is home to Specialty Clinics of Sweetwater County and Sweetwater Regional Cancer Center. In 2017, it opened Family, Internal and Occupational Medicine clinics in a new 15,000- square-foot building.

The hospital serves a 10,491-square-mile county whose 43,000 residents rely on it for expert, compassionate care close to home – proximity that can save lives.

“It’s especially challenging for patients with certain kinds of cancer who will be getting chemotherapy for the rest of their lives. Chemo makes you weak and tired, so traveling is even more difficult. Patients getting treated closer to home have better outcomes.”

Symington and her staff are working hard to narrow the opportunity gap between rural and urban patients. The center has introduced a survivorship program, and offers services such as lymphedema, genetic counseling and an expert, passionate oncology nursing team. She has also introduced clinical trials to the cancer center, something generally found only in larger hospitals.

“Participation in clinical trials by rural patients can improve their outcomes to be like those in urban areas,â€ Symington says. “We’re not just rural, we’re frontier, so having clinical trials is a big deal. It’s a huge opportunity.”

For patients, finding treatment closer to where they live means a better quality of life as well as better outcomes at a lower cost. George Andersen was diagnosed with prostate cancer in 2019 and underwent surgery and 30 radiation treatments at the hospital.

“The medical care was excellent, and the staff was professional and so friendly. It was perfect for me and for anyone else in Rock Springs,â€ says Andersen, who is now cancer free. “I used to have to go to Salt Lake City, 180 miles to the west. But what if I had to stay for treatments in Salt Lake City? I can’t imagine Rock Springs not having this center. I’ve spoken with friends in Las Vegas, and they don’t have this kind of place.”

Q: Where are you and your family from originally?

A: I’m from eastern Montana and am the youngest of six children. Family always comes first in my mind, and between my better half and me, we have five kids. Currently, four of them are teenagers, so that presents its own challenges, but we have a lot of fun. We enjoy the outdoors, especially hiking and mountain biking. I received my master’s degree in health administration from Montana State University.

Q: Why did you choose Sweetwater County to live and work?

A: Sweetwater County has a tremendous opportunity for growth in many industries, and with health care being a passion of mine, my position at Aspen Mountain Medical Center has given me an opportunity to support rural Wyoming. As for living here, we have mountains all around us, so hiking is available within minutes. Sweetwater County is also close to skiing.

The Economy in Sweetwater County is Growing and Energized

A: Our physicians are top notch from around the country with decades of experience – they have seen it all. Some served the U.S. Ski Team and worked with professional sports teams. But in my opinion, the No. 1 advantage that sets Aspen apart is you can stay at home and receive top care. You don’t have to travel across or out of state.

Q: Do you have any specific near-future plans for the hospital?

A: I’ve been here over a year and there have already been a few changes, and we have new plans for our facility. One goal is to offer more services to help more patients in Sweetwater County and the surrounding areas.