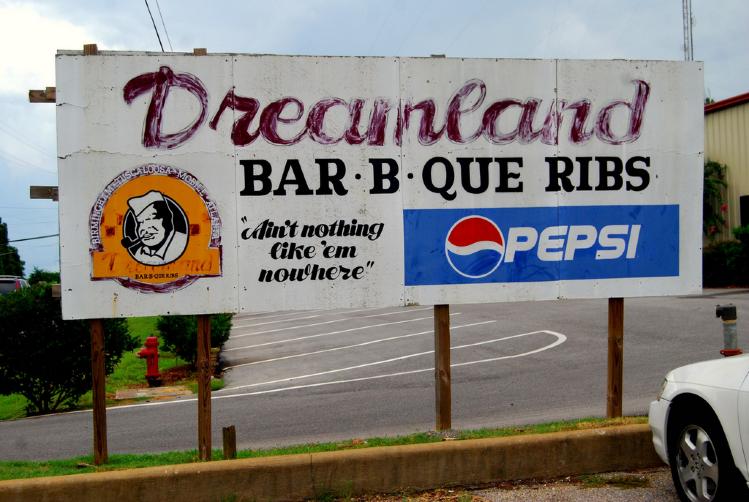 Alabama serves up many styles of barbecue, from pecan smoked pork to white-sauce soaked chicken. Tuscaloosa, AL, or T-Town as many locals refer to it, is one of the best places to try it all. The city has 13 barbecue joints, shacks and restaurants. Tuscaloosa was the starting point for what have become two of the most successful barbecue businesses in the country – Dreamland Bar-B-Que and Moe’s Original BBQ. T-Town is of course best known for being the home of the University of Alabama, a college football powerhouse, but this city has earned a reputation for producing seriously strong ‘cue.

Dreamland Bar-B-Que: John “Big Daddy” Bishop opened Dreamland Cafe in 1958, the same year coaching legend Bear Bryant began his tenure at Alabama. Dreamland’s ribs are considered legendary by many who stuffed their faces after watching the Crimson Tide crush an opponent. Dreamland now has eight locations throughout Alabama and is looking to expand its franchise.

Moe’s Original BBQ: After meeting at the University of Alabama, and learning the tricks of the smoking trade from a man named Moses Day in Tuscaloosa, three friends honed their culinary skills and opened their first restaurant in Colorado. They eventually came back to open a restaurant where they got their start. There currently have more than 20 locations in five states.

Archibald & Woodrow’s B-B-Q: Instead of the thicker, sweet sauces slapped on many BBQ platters, this places uses a thin, tangy vinegar sauce. Customers say the restaurant isn’t pretty to look at, but the ‘cue is great.