Big-city life (and rent prices) not worth it anymore? Check out these alternatives. 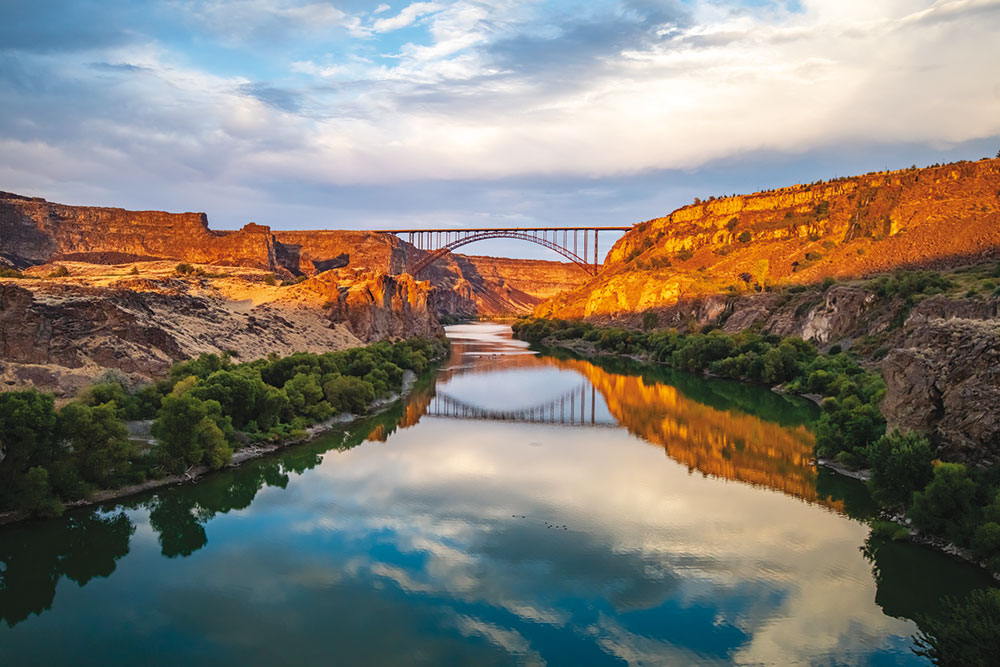 For those who pay a premium for downtown living, easy access to all the perks of city life – restaurants, nightlife, museums, sports – justifies handing over a massive rent check every month. But when the COVID-19 pandemic ushered in waves of closures – suspending Broadway shows, shutting down restaurants and bars, putting museums and professional sporting events in limbo for the foreseeable future – it drastically altered the way urbanites were able to interact with their cities. Instead of taking the subway to work and meeting up with friends for happy hour, many in major metropolises became quarantined in apartments short on square footage, co-working with roommates at the kitchenette table. By June, even The New York Times asked the million-dollar question: Is New York City Worth It Anymore?

Some people, of course, are big-city purists and love the hustle and bustle of major metropolises – even when the bustle goes temporarily bust. But COVID has prompted many others to, at the very least, rethink their living situations and consider joining the big city exodus.

A survey by Ipsos found that 42% of people have either moved or thought about moving since March, and rural areas, small and mid-size cities were their top choices. In another recent survey, The Pew Research Center found that more than a fifth of Americans either moved because of COVID or knew someone who did.

Thinking about making a move yourself? We don’t blame you. Here are six reasons you might be tempted to leave big city life behind, along with some recommendations on where to live instead. 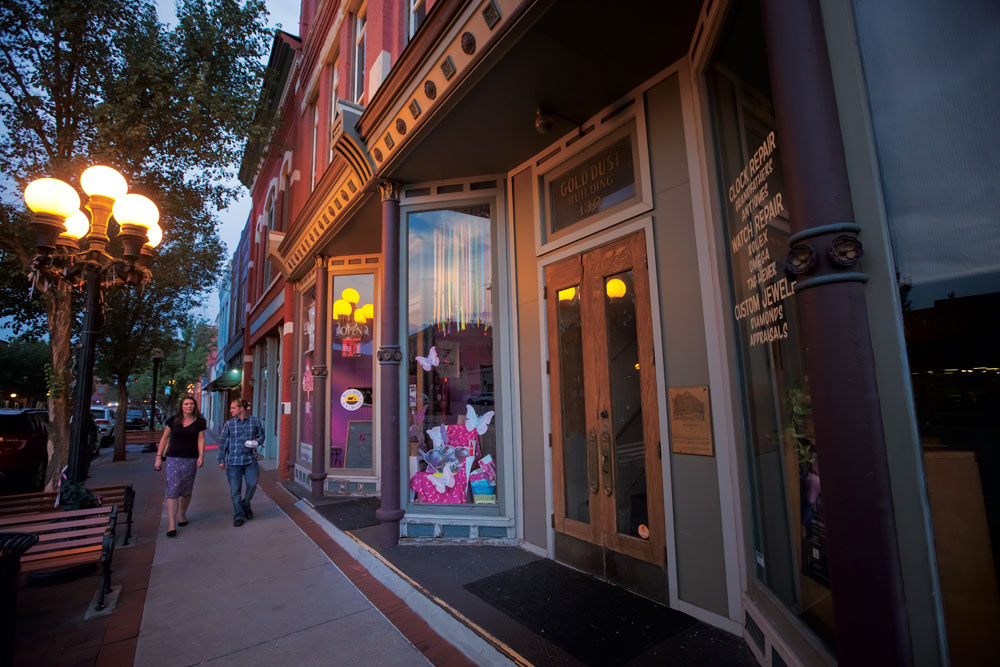 Prior to COVID-19, remote work was already gaining popularity. But the pandemic has certainly accelerated the trend. If remote work remains part of the new normal, and you aren’t tethered to a physical office, you have more freedom than ever in deciding which markets will allow you to best stretch your dollar.

Multiple factors layer into cost of living, from how much it costs to park your car to what an average lunch tab runs. But since housing likely has the biggest impact on your budget, let’s check out what it would cost to buy a home in a big city versus making the purchase in a smaller, more affordable city.

First-time homebuyers, on average, put down six percent on a home, according to the National Association of Realtors. So, here’s how much you’d have to save for a down payment in major metros versus more affordable cities that still have big-city amenities:

Located in southern Colorado, Pueblo is one of the most affordable places to live in the state, with home prices well below the state and national average. Lot sizes are spacious; hiking, biking and kayaking adventures can fill up your weekends; and there’s even an Instagram-worthy outdoor neon alley lit up with vintage signs.

Pittsburgh is one of Livability’s best cities for first-time homebuyers because of the affordable entry point. Known as the “City of Bridgesâ€ because, well, there are hundreds of them, the city is an integral player in Pennsylvania’s burgeoning tech scene. This city is known for its creativity and inventions, too, as showcased at the Warhol Museum, various craft breweries and Inventionland, an immersive work environment with sets like a shipwrecked pirate ship and cupcake kitchen.

Fun fact: Both Pueblo and Pittsburgh are known as steel cities, and both have reinvented themselves as hip places to live.

In some smaller cities, it’s not only easier to afford a home with more space, but the great outdoors – mountains, rivers, forests – are pretty much an extension of residents’ backyard. So, if being cooped up at home during COVID made you a little (OK, a lot) stir crazy, start zeroing in on communities that prize their geographical assets and want them to be easily accessible to residents.

Known as the ‘Magic Valley,’ Southern Idaho offers a hat trick for outdoor enthusiasts: It’s surrounded by waterfalls, mountains and rivers. The area’s distinctive geography is a result of volcanoes and the United States’ largest private irrigation project. A fun way to cool down during the summer is to just add water – whether it’s a kayaking or whitewater rafting excursion on the Snake River, bird-watching and hiking along Auger Falls Park or fishing at Hagerman Wildlife Management Area. In nearby Boise, there are nearly 200 miles of hiking and mountain biking trails that are close to the downtown area. (For a highlight reel of Boise outdoor adventures, bookmark this 24-hour itinerary.)

Outside Magazine has lauded Chattanooga its best town ever. High praise, but well-deserved when you realize this Tennessee city has all of the great outdoor amenities you’d wish for, like a 13-mile Riverwalk that runs parallel to the Tennessee River and the Tennessee River Gorge, which is known as “Tennessee’s Grand Canyon.â€ But some unexpected adventures are beckoning in the Greater Chattanooga region, too, including  plenty of spots for rock climbing, cave exploration and even river snorkeling. 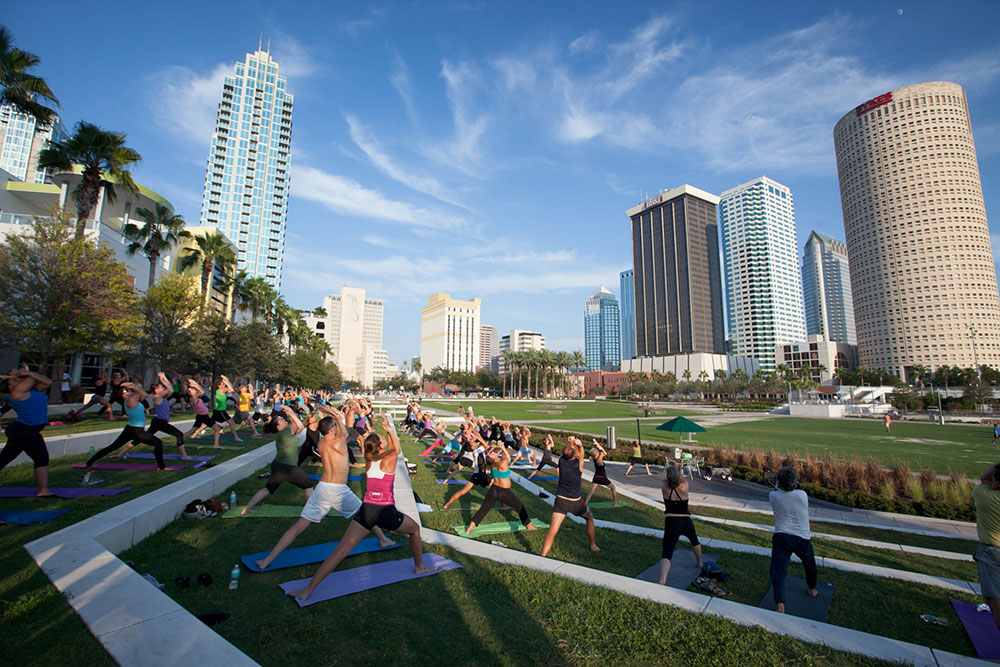 3. You want friendly neighbors and a tight-knit community.

During COVID, we’ve seen inspiring acts of kindness sprouting up in neighborhoods and communities, whether it was pop-up food pantries or leaving teddy bears in windows so children could go on scavenger hunts. COVID gave new meaning to being a good neighbor – whether it was sharing an extra roll of toilet paper, running errands for an elderly neighbor or growing extra vegetables in your garden so you had bounty to share.

So where are communities especially tight-knit?

Turn your attention to Tampa. The sunny city completed Water Street Tampa, a massive, $3 billion redevelopment project that connects the city’s downtown waterfront to downtown. But it also brings together residents in a new way thanks to apartment buildings that have forward-thinking amenities like rooftop gardens and fitness centers. Plus, a 2.5-mile Riverwalk allows for social distancing and access to public parks.

Both Iowa City and Cedar Rapids are known for a welcoming and friendly vibe – they even offer new residents a “wingman” to help them get connected and make new friends. Cedar Rapids has made a name for itself as a place that celebrates international culture as the city is home to a large population of people who have descended from immigrants from today’s Czech and Slovak Republics and also is home to America’s first mosque, the Mother Mosque of America. In normal times, McGrath Amphitheatre and Veterans Memorial Stadium bring residents together for festivals and concerts. In nearby Iowa City, residents bond over cheering on the Hawkeyes and residents embrace a culture of creativity and collaboration – which is showcased in the mix of start-up and Fortune 500 companies that make the economy thrive. 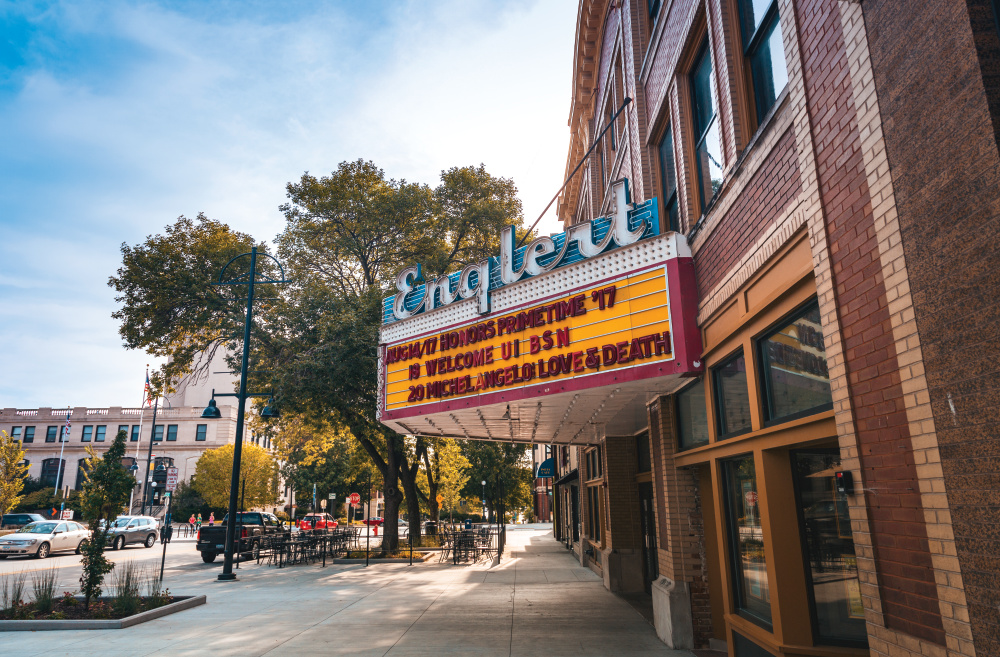 Wish you had more time in your day? Eliminate your commute and move to a city where traffic jams are nonexistent.

Iowa has the safest drivers in the nation, according to a study from a car insurance comparison website, and Ames makes it into Livability’s top top 10 list of places with shortest commutes. On average, commuters only spend 15 minutes on their way to and from work in Ames, which is 10 minutes less than the national average. You know what that means? More time for happy hours at a local brewery or a post-work ride along the miles of bike trails that make up Ames. Keep your eyes peeled for public art; Ames has a cool Neighborhood Sculpture Program.

We all know Los Angeles and San Francisco are both notorious for bad traffic. But it’s possible to live in California and not have to mess with standstill traffic. Fresno is located in central California, and the average commute time is just 22.3 minutes. When you want to slip away on the weekends, the Sierra Nevada mountains are an easy two-hour drive and the coast is three hours away. Oh, but one road you’ll want to take your time on in Fresno: The Fresno County Blossom Trail, which is typically blossoming from mid-February to mid-March, and the citrus blossoms perfume the air. Heaven. 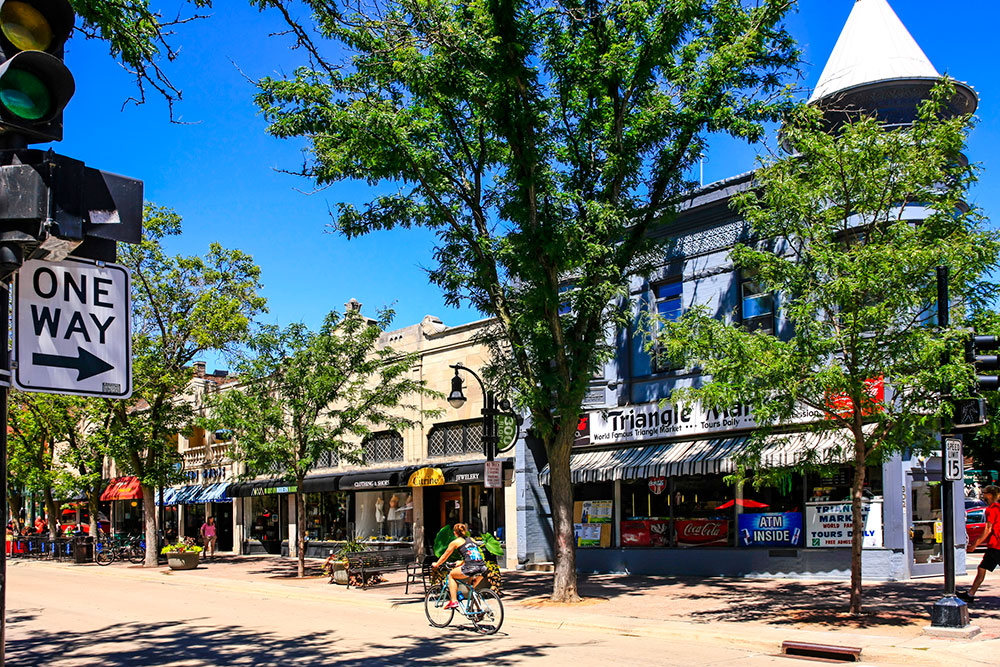 Thinking about reinventing your career? Urban job markets can be cutthroat, and you might be feeling some COVID-induced scarcity within your current industry.

But throughout the United States, in some small and mid-sized cities, you can still find strong job markets where collaboration and creativity thrive.

In Murfreesboro, TN, about 30 miles southeast of Nashville, the job market is poised to grow by 10 percent between 2017 to 2022. Many of the current job openings are in manufacturing and construction, but  Murfreesboro is in the midst of a tech boom, too. A report from Middle Tennessee University projects the number of tech jobs will grow by 16 percent by 2022.

Want more ideas for solid economies with plenty of job opportunities? Take a look at this list of the most diversified economies in the United States. Madison, WI tops the list with advanced manufacturing, agriculture, healthcare, information technology and life sciences among the top key industries. Plus, it’s on an isthmus between lakes Monona and Mendota, has some stunning architecture like the Monona Terrace convention center designed by Frank Lloyd Wright, and the fun, youthful vibe of a college town. 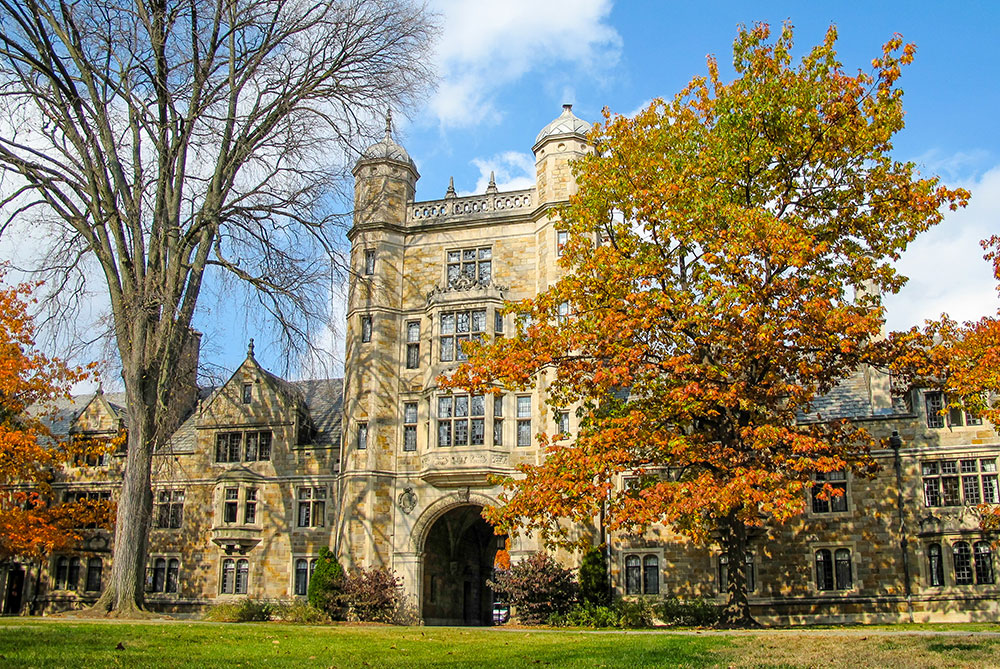 Whether you are thinking about going back to school to explore a new career path or you simply love the energy of college towns, there are mid-sized towns with resilient economies and that make fantastic places to live.

On the West Coast, Corvallis, OR has a lesser-known tech scene, thanks to a number of software startups, a strong engineering program at Oregon State University and the presence of Hewlett Packard.

Or, on the East Coast, Rochester, NY is a college town with a number of key industries that continue to thrive, including photonics, optics and biotech.

And in between is Ann Arbor, home to the University of Michigan and a creative city with a botanical garden, museums, beer gardens and great restaurants including  Zingerman’s Deli, a beloved icon.