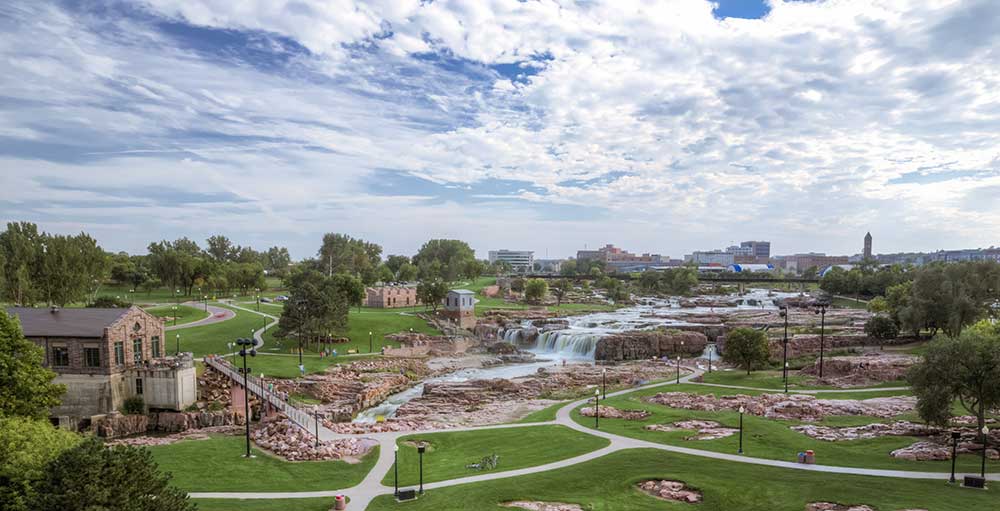 Sioux Falls is in a remote location, more than 100 miles from the next major city. But that’s fine, as basically everything a person needs for an enjoyable retirement is located right here in the city. Granted, the winters can be cold and long, but Sioux Falls consistently ranks high in most other categories, including attractive neighborhoods, low crime, schools and entertainment options. Health care is a particularly strong aspect of the city. Sanford Health is the largest employer in Sioux Falls, and a recent study by the Employee Benefit Research Institute ranked the city No. 1 in the nation in health care. Sioux Falls has also earned accolades as one of the 100 Best Places to Live (2015 & 2016) and one of the 50 Best Cities for Entrepreneurs. All of which is why Sioux Falls proudly calls itself “The Best Little City in America.”

Perhaps the biggest attraction of Sioux Falls for retirees is that it is one of the 10 Most Affordable Places to Live in America. Both home prices and the cost of living are lower than the national averages, propelled by a strong and diverse economy. The overall tax rates are among the lowest in the nation, with no state income tax and no tax on Social Security benefits. The favorable tax breaks have led a number of financial institutions – including Citibank, HSBC and Wells Fargo – to place headquarters and operations centers in Sioux Falls.

Why Sioux Falls is One of the Best Places to Live

When the weather is nice, Sioux Falls is a wonderful place to get out and about. There are more than 70 parks and greenways, many of them within sight of the city’s namesake Big Sioux River. The best views are at the 123-acre Falls Parks, where an average of 7,400 gallons of water drop 100 feet over a series of waterfalls each second. Some of the first buildings ever built in Sioux Falls are located in the park, including the remains of the seven-story Queen Bee Mill.

Even when the weather turns cold, plenty of walking – and shopping – can take place at the recently renovated Empire Mall, a 1.3 million-square-foot shopping center that draws more than 7 million visitors each year from across the Midwest. If all that walking works up an appetite, there are more than 650 restaurants to choose from in Sioux Falls, an impressive number for a city with a population of approximately 170,000 people. Other attractions include the Butterfly House, with more than 800 free-flying butterflies, and the Heartland Country Corn Maze, an 11-acre life-size maze carved out of corn stalks in nearby Harrisburg.