What do Garth Brooks, illegal frolfing and a famous internet cat have to do with Livability's Top 100 Best Places to Live? A lot, it turns out. 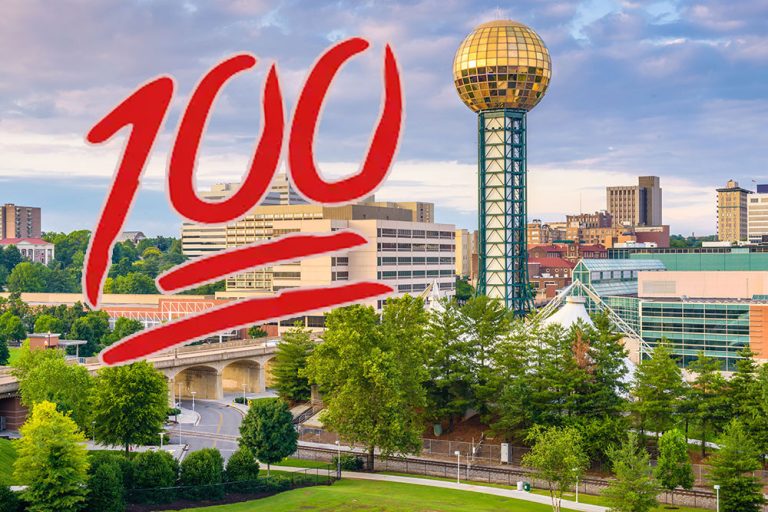 To create this year’s Top 100 Best Places to Live list, the Livability team spent hundreds of hours researching cities, interviewing locals and even doing some taste-testing (choosing the best brewery in each city was a tough job, but somebody had to do it!).

In the process of gathering so much information about 100 awesome cities, we also found a lot of weird, fun, not-totally-relevant-but-still-cool facts that didn’t make it into the final text. From internet cats to Garth Brooks to some seriously strange laws still on the books, we couldn’t resist compiling our favorite tidbits and sharing them here.

You can thank us later, when you use one of these to clinch a win at trivia night.

1. 17 cities on this year’s list are the capital of their respective states.

3. Only four cities have been on the Top 100 Best Places to Live list since it started in 2014: Iowa City, IA, Rochester, MN, Columbia, MO and Asheville, NC.

4. This year’s #2 city, Raleigh, NC, is known as the ‘City of Oaks,’ because of the number of oak trees that line the streets.

5. The University of Missouri, commonly known as Mizzou, in Columbia, MO claims that it held the first football homecoming game in 1911.

8. In 2008, Iowa City, IA, became the world’s third United Nations Educational, Scientific and Cultural Organization (UNESCO) City of Literature and remains one of the best lit cities in the country.

9. January Jones, known for her roles in “Mad Menâ€ and “Last Man on Earthâ€ is from Sioux Falls, SD, and worked at a local Dairy Queen before making it big.

10. Nine bronze mice are hidden along Main Street in Greenville, SC, as part of a scavenger hunt for visitors of all ages.

11. Aaaand, speaking of rodents – it is illegal to keep a rat as a pet in Billings, MT.

12. Jacksonville, FL is the hometown of Jason Mendoza, a character on the popular TV show “The Good Place.”

13. Madison, WI’s capitol building was constructed in 1917 and uses 43 types of stone from six countries and eight states.

14. In 1960, a group of students staged a sit-in at a segregated Woolworth’s lunch counter in Greensboro, NC and from there the sit-in movement spread to college towns throughout the South.

18. None of the scenes from the popular movie “Fargoâ€ were actually filmed in Fargo, ND.

19. Pittsburgh, PA is also known as the City of Bridges and is home to 446 bridges.

21. Kansas City is so large that it spans territory in both Missouri and Kansas!

22. Rochester, MN, is home to the Mayo Clinic, a nonprofit academic medical center that is routinely ranked the best in the nation.

25. It is illegal to honk your car horn in front of a sandwich shop after 9 p.m. in Little Rock, AR. Don’t say we didn’t warn you!

26. Kelly Clarkson, the winner of the first season of “American Idol,â€ is from Fort Worth, TX.

27. Asheville, NC, has more breweries per capita than any other U.S. city. Cheers!

28. The AT&T Building in downtown Nashville, TN is called the “Batman Buildingâ€ due to its resemblance to bat ears and similarity to the infamous Batman’s infamous mask.

29. Ninety-five percent of the world’s supply of bourbon is made in Kentucky along the Bourbon Trail, which has stops in Lexington and Louisville.

30. The Dalai Lama has visited Bloomington, IN, numerous times and has even blessed the city’s Tibetan Mongolian Buddhist Cultural Center.

31. Richmond, VA, is one of the nation’s oldest major cities.

33. Manhattan, KS, is known as the “Little Apple” – not to be confused with the “Big Apple” of Manhattan, NY.

34. Speaking of the Big Apple, despite what those big city folks might claim, the Reuben sandwich was actually invented over a late-night poker game in Omaha, NE.

36. Ithaca, NY, Greenville, SC, Spokane, WA and Sioux Falls, SD, all have waterfalls running through the middle of town!

37. During a trip to Lincoln, NE, you can visit the National Museum of Roller Skating.

38. Theodore Roosevelt coined the phrase “good to the last dropâ€ after drinking a cup of locally made coffee in Nashville at the Maxwell House Hotel.

39. We can thank Seth Wheeler of Albany, NY, for continuous roll toilet paper – before then it was only available one sheet at a time!

41. The World’s Largest Continuous Sidewalk is located in Tampa, FL.

42. Prince was born and raised in Minneapolis, MN.

43. There is a city ordinance in Madison, WI, that prevents any new building from being taller than the Capitol dome – making (and keeping) it the tallest building in the city.

44. The world’s first color television was manufactured at the RCA Factory in Bloomington, IN, in 1954.

45. The city of Pittsburgh, PA, has more than 700 staircases, which are maintained by an Inspector of Steps from the city’s planning commission. Yes, really.

46. Louisville, KY, is home to “The Big Bat,â€ AKA the world’s largest baseball bat made of steel that weighs more than 68,000 pounds and towers 120 feet into the sky.

47. Spokane, WA, is the smallest city to host the World’s Fair.

48. The famous (or perhaps infamous) Sunsphere in Knoxville, TN, was built for the 1982 World’s Fair.

50. Omaha, NE, is known as “Swim City,” as it has hosted the U.S. Olympic Swim Trials for three consecutive trials and will host them again in 2020.

51. In Helena, MT, it is illegal to host frisbee golf (or “frolf”) contests at night.

52. Steven Spielberg, who directed greats like “E.T.” and “Jaws,” was born in Cincinnati, OH.

54. Omaha, NE, is home to the Bob Kerrey Pedestrian Bridge, known as “Bob.” The bridge is 3,000 feet and links more than 150 miles of hiking and biking trails.

55. Bob also connects Nebraska and Iowa, and taking a photo on the state line is known as “Bobbing.”

56. Forty-eight percent of Americans live within a 600-mile radius of Columbus, OH.

58. The Big Mac was invented in the suburbs of Pittsburgh, PA, by a local franchisee and was first sold in the greater Pittsburgh area in 1967 before being released nationwide in 1968.

60. During the 1850s, fire destroyed much of Marietta, GA, on three separate occasions.

63. To fund the demolition of the Orlando, FL city hall, the city allowed the building to be blown up for the opening scene of “Lethal Weapon 3.”

64. Scotty McCreery, the 10th season winner of “American Idol,” is from Raleigh, NC.

65. The Ybor City location of Columbia Restaurant opened its doors in 1905 and the Tampa-based spot is Florida’s oldest restaurant.

66. Omaha was the territorial capital of Nebraska, but when the area became a state in 1867, the capital city was relocated to Lincoln.

67. A record 45 cities made their first appearance on this year’s list.

69. The St. Louis Cathedral in New Orleans, LA, is the oldest continuously operating cathedral in the U.S.

71. Limestone from the greater Bloomington, IN, area has been used to build 35 of the 50 state capitals and makes up parts of many famous buildings, including the Empire State Building and the Pentagon.

72. It is against the law to swim or wade in public fountains in Wichita, KS.

74. Every state except for New Jersey and Hawaii were represented on this year’s list. Sorry, guys.

75. Huntsville, AL, is known as “Rocket City” because of its heavy presence of aerospace technology and the iconic rocket at the U.S. Space & Rocket Center.

78. Grand Rapids, MI, was the first city to add fluoride to its drinking water in 1945.

79. Both Ogden, UT, and Idaho Falls, ID, are awesome mountain towns that you can actually afford to live in.

80. Rock band REO Speedwagon got its start in Champaign, IL.

83. Cincinnati, OH, has been called the “Chili Capital of America” because it has more chili restaurants per square mile than any other city in the world.

84. A company based out of Louisville, KY, claims to have produced 90% of the country’s disco balls during the disco craze of the ’70s.

86. Durham, NC, is called the “City of Medicine” as it has more than 300 health-related and medical companies and medical practices.

87. In New Orleans, it is illegal to ride a Mardi Gras float without a mask.

88. The first seeing eye dog was used by a Vanderbilt University student in Nashville, TN, in 1908.

90. Many signs in Worcester, MA, feature a heart as it is commonly referred to as the “Heart of the Commonwealth.”

92. The George Bush Presidential Library in College Station, TX, features a statue of horses leaping over the Berlin Wall.

93. Many parking lots in Fairbanks, AK, provide electrical outlets for plugging in vehicles’ engine block heaters so they will start during cold weather.

94. Gatorade was named for the University of Florida Gators, located in Gainesville, FL.

95. The world’s first franchised Coca-Cola bottling plant was built in Chattanooga, TN, by two attorneys who bought the franchise bottling rights for $1 each.

96. Kansas City, MO, is the backdrop for Season 3 of Netflix’s breakout reboot of “Queer Eye.”

97. Michael Phelps, the most decorated Olympian of all time, was born in Baltimore, MD.

98. Garth Brooks, the best-selling solo artist in the United States, was born in Tulsa, OK.

99. Tucson, AZ, is one of the sunniest cities in the nation – averaging 350 days of sunshine a year.